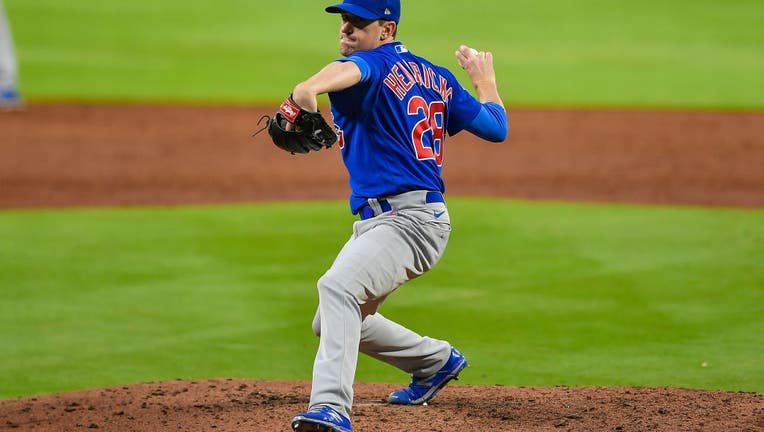 ATLANTA, GA APRIL 28: Chicago starting pitcher Kyle Hendricks (28) throws a pitch during the MLB game between the Chicago Cubs and the Atlanta Braves on April 28th, 2021 at Truist Park in Atlanta, GA. (Photo by Rich von Biberstein/Icon Sportswire via

MESA, Ariz. - Kyle Hendricks hopes to return to the form that made him one of the Chicago Cubs’ most reliable pitchers in recent years.

The team is counting on the veteran right-hander to do just that.

With an abbreviated spring training brought on by the lockout and the season set to start April 7 against Milwaukee at Wrigley Field, time to prepare is running short.

"We know it’s going to be quick," Hendricks said. "But we can’t take that approach mentally. Take our time. Do what we need to do. Don’t risk injury. At least we’re playing a full season, 162, and our focus is on where we’re going to be at the end."

Hendricks is determined to show last season was an aberration for him.

The 32-year-old right-hander won 14 games to match his second-highest total. Otherwise, it was by far his worst year.

Hendricks’ ERA leaped from 2.88 in the pandemic-shortened 2020 season to a career-worst 4.77. The major league-leading 200 hits were the most he has allowed. So were the 31 homers, a big jump for someone who had never given up more than 22.

For a pitcher who in previous years received Cy Young Award votes and even led the majors in ERA during the 2016 World Series championship season, it was a startling year. And it’s one he and the Cubs don’t want to repeat.

"I felt last year I was so flat, and everything was up over the plate," Hendricks said. "So, I’ve been focused on back to getting angle, down in the zone and fastball command. Back to my staples. It was really good so far."

A return to form by Hendricks could go a long way toward turning the Cubs back into contenders in the NL Central.

Last season, Chicago went from leading the division to finishing fourth at 71-91 and missing the playoffs for the second time in three years. Along the way, the Cubs dealt championship core players Kris Bryant, Anthony Rizzo and Javier Báez, as well as closer Craig Kimbrel prior to the deadline.

But president of baseball operations Jed Hoyer has made it clear he doesn’t see this as a long rebuilding process. The Cubs took what might be a big step this week when they agreed to an $85 million, five-year contract with star Japanese outfielder Seiya Suzuki.

That deal had not been announced by the team as of Thursday afternoon. But a person familiar with the situation, speaking on the condition of anonymity because it was pending a physical, confirmed it to the Associated Press.

A bounce-back season by Hendricks would obviously help. After all, he comes into his ninth season with an 83-55 record and 3.36 ERA.

Hendricks attributed last season’s struggles to his approach and mechanics. He said his delivery became more robotic rather than athletic. But he thinks he has straightened it all out.

"I had to reevaluate where I was and everything was flat, up in the zone and I didn’t rely on my fastball," he said. "I put focus back on that this offseason. Getting back down in the zone with movement, commanding my fastball, and hopefully, I can establish that early."

Manager David Ross, his former catcher, is confident Hendricks will return to form.

"Kyle certainly knows himself better than anybody," Ross said. "When he attacks hitters and understands his own strengths and weaknesses, I think that’s a powerful thing. To hone in on your strengths, if you are a changeup guy, the fastball will make the changeup that much better. We all can overthink things as players. Sometimes it takes a little break to get a reset."

Some of the pressure will be off of Hendricks with the additions of Stroman and Wade to the rotation.

"I’m so excited to have those guys," he said. "Straight competitors. Love to compete, love to win and have the ball in their hand. That’s what we’ve got to have around here. We’ve got to set the tone as pitchers, and we didn’t do the best job of that last year and bringing in guys with a competitive edge will help us out a lot."