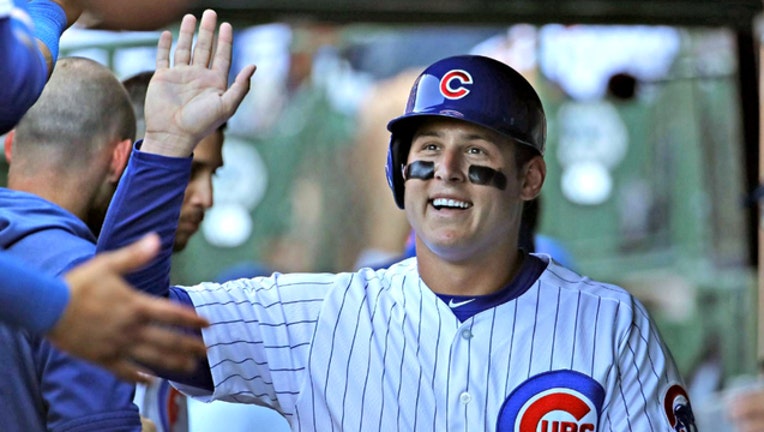 CHICAGO - Cubs president of baseball operations Jed Hoyer insisted Wednesday he is confident Anthony Rizzo will remain in Chicago beyond this season even though the star first baseman is cutting off talks on a new contract.

Though his preference is to stay with the Cubs, Rizzo set an opening-day deadline for a new agreement. The three-time All-Star said this week he won’t listen to an offer once the season starts unless the proposal is close to what he thinks it should be.

"I don’t think there’s any bigger Anthony Rizzo supporter out there than I am," Hoyer said. "Obviously, I want him playing first base for the Chicago Cubs for a long time, in 2022 and beyond. I’ve made that really clear to him throughout the process."

Hoyer said he is "very confident" a deal will get done. He also said he respects Rizzo’s decision to limit talks once the season starts Thursday, though the Cubs will remain open to negotiating during the year.

"We have no reason not to talk in season," Hoyer said.

Rizzo, who in 2016 helped the Cubs win the World Series for the first time since 1908, agreed in March 2013 to a $41 million, seven-year contract that included two team option years. He has a $16.5 million salary this season.

He’s not the only Cubs star with an expiring contract.

Third baseman Kris Bryant and shortstop Javier Báez also are entering the final season of their deals. Bryant has a $19.5 million salary and Báez $11.65 million.

"As with Anthony, we have a lot of great players in contract years," Hoyer said. "Certainly, our hope is we can have some of those players beyond 2021."

Like Rizzo, Bryant (.206, four homers, 11 RBIs) and Báez (.203, eight homers, 24 RBIs) struggled in the pandemic-shortened season. Bryant was bothered by injuries and Báez struck out 75 times in 59 games.

The Cubs still managed to win the NL Central after missing the playoffs in 2019. But they ranked among the worst in the majors with a .220 batting average. In their first-round playoff series against Miami, they managed just one run in a two-game sweep.

How Rizzo, Bryant and Báez perform in the early going could go a long way toward determining whether the Cubs look to add or trade players prior to the deadline. The fact that their contracts are expiring adds another layer of uncertainty.

"That’s something we’re gonna have to live with as a team," Hoyer said. "We have so many guys in free agent years. That’s gonna have to be something that this team is able to handle."

The Cubs traded ace Yu Darvish to San Diego in the offseason. Jon Lester and Kyle Schwarber signed with the Washington Nationals. And fans made it clear they weren’t happy with their team’s spending.

But when it comes to Rizzo, Hoyer remains confident.

"I have expressed to him over and over that we want to have him back," he said. "I have confidence that we will bring him back. We’ve expressed how we see the path to a deal."