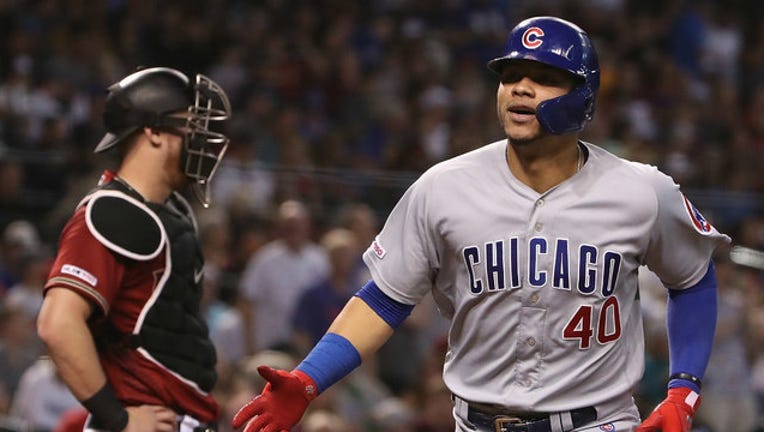 Willson Contreras of the Chicago Cubs reacts after hitting a solo home run against the Arizona Diamondbacks during the fourth inning of the MLB game at Chase Field on April 28, 2019 in Phoenix, Arizona. (Christian Petersen/Getty Images)

PHOENIX (AP) - Chicago Cubs manager Joe Maddon likes to set his lineups before every series so the players know what to expect.

Before Sunday's game against Arizona, a group of veteran players convinced him to start David Bote after he hit two home runs the night before.

The player he replaced in the lineup, Ben Zobrist, ended up having the biggest hit of the game. Caught the final out at the warning track, too.

Zobrist lined a two-run double in the 15th inning, and the Cubs outlasted the Diamondbacks 6-5 in the second-longest game in Chase Field history.

Maddon "listens to what the guys have and that shows even more respect," Bote said. "It's not `I have my way.' The fact he did that and listened, shows a lot of courage. He has a good pulse on the clubhouse."

After escaping a jam in the 14th inning, Tyler Chatwood (1-0) sparked the decisive sequence with a one-out double. Albert Almora Jr. followed with a single up the middle and Zobrist, who entered the game in the 10th inning, hit a double to the right corner in right off Matt Andriese (3-2).

Kris Bryant followed with a sacrifice fly to put Chicago up 6-3.

"In that situation, you just go out and grind," Andriese said. "It is late in the game and you give it all you got."

Kyle Ryan gave up Caleb Joseph's two-run single in the bottom half before Allen Webster got Nick Ahmed to fly out at the warning track for his first career save.

Bryant also hit a two-run homer off Luke Weaver and Wilson Contreras had a solo shot for the Cubs, unbeaten their last six series (5-0-1).

The Cubs struck out 19 times and went 2 for 15 with runners in scoring position, including 0 for 5 with the bases loaded, in a game that lasted 5 hours, 36 minutes.

"We had plenty of opportunities and so did they," Maddon said. "Both sides were frustrated at not taking advantage of moments. You win a game like that, see what happens."

Arizona rookie Jon Duplantier worked out of bases-loaded, no-out jam in the 12th inning and escaped another tight spot in the 13th when Contreras was thrown out at home on a delayed steal.

Eduardo Escobar homered twice and had three RBIs for the Diamondbacks. Weaver allowed three runs and six hits in 4 1/3 innings.

"A situation where we ran out of a little steam in the bottom of the 15th," manager Torey Lovullo said. "We made things interesting and that is one of the great qualities that this team walks around with and that is they are not going to shut down under any circumstance."

Chicago's Jose Quintana was sharp against the Diamondbacks-- everyone except Escobar.

The left-hander allowed five hits and two were homers by Escobar: a towering solo shot in the fourth inning and a two-run shot in the sixth that tied it at 3.

Quintana allowed five hits in 5 2/3 innings. He was 3-0 with a sparkling 0.86 ERA in his previous three starts.

Contreras tried to steal home on his own, but Maddon was OK with the decision.

Maddon likes his players to have some freedom and respects their decisions when they see something, even if it doesn't work out.

"He took a shot," he said. "I really try to not restrict them if they see something. The pitcher caught and calmly through it back to the catcher. He fudges that at all, we score a run."

Duplantier allowed a hit and struck out four in four innings. He was optioned back to Reno after the loss. A corresponding move will be made on Tuesday, the team said.

Koch had a 9.15 ERA in nine relief appearances with the Diamondbacks this season.

Cubs: LHP Cole Hamels is looking to bounce back against Seattle on Tuesday after matching a career high with six walks against the Los Angeles Dodgers in his last start.

Diamondbacks: RHP Merrill Kelly is holding right-handed hitters to a .222 average headed into Tuesday's start against the New York Yankees.