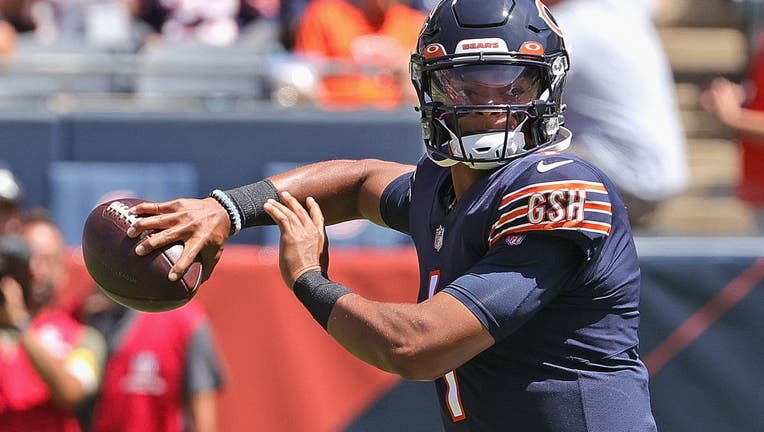 The Bears have a unique quarterback situation with popular rookie Justin Fields not expected to win the starting spot away from Dalton for opening day despite eye-opening play in the first preseason game, a 20-13 win over the Miami Dolphins on Saturday.

At least judging from fan reaction against Miami, it could be Dalton fighting an uphill battle even though he owns the job.

"That’s not easy being on that sideline for that game and hearing when Justin runs out, all the cheers," Nagy said. "I mean, let’s just face it, if that was any of us, that’s not easy."

It’s not as if Dalton is being booed — although No. 3 quarterback Nick Foles was when he replaced Fields.

Booing this week likely will be reserved for former Bears quarterback Mitchell Trubisky when he returns Saturday to play for Buffalo in a preseason game at Soldier Field.

Dalton merely shrugs off the Fields mania and maintains his focus on the Sept. 12 opener against the Los Angeles Rams, all while also helping Fields to learn the ways of the NFL.

He’s heard fans cheering and shouting Fields’ name at Halas Hall practices and seen the No. 1 jerseys each day.

"Andy is great," Nagy said. "I mean, you know, this is such a unique situation. For a guy like Andy, where I feel really comfortable is knowing that he’s comfortable in his own skin, he believes in himself and he knows that we believe in him."

Dalton knows Fields is the future, but is trying to make it a more distant future. Fields’ 10-for-14 effort for 142 yards against Miami was solid, but Dalton might be most impressed with Fields’ speed.

"If he’s got that room in front of him, that’s a part of his game that he can definitely use. With his speed that he’s got, definitely a thing that he can use in his game."

With the Bears offensive line an issue — neither starting tackle has practiced and guard James Daniels is sidelined with a groin injury — it might require a quarterback who can run out of a collapsing pocket.

Nagy is resisting this temptation and will stick by his promise to Dalton about the opener, even though Fields gets an occasional snap at practice with first-team players. Saturday’s game didn’t change this approach.

"He’s a true pro," Nagy said of Dalton. "He’s doing everything we’re asking him to do. And I think that’s the only thing that we can worry about right now is just, again, coming out here and practice hard, man, do everything you can.

"We know it’s not easy. But if you just worry about being the best Bears quarterback you can be, help everybody else out, you help us out, and in the end it’s a win for everybody."

Bears teammates are trying to be cautious with throwing too much credit Fields’ way.

"Obviously from the time he stepped on the field, the crowd went crazy," Bears safety Tashaun Gipson said. "That atmosphere, you could imagine it being packed out (in the regular season). It’s just exciting to see, man. He’s an exciting player.

"That’s why you draft him, that’s why you traded up to go get him, man. You can’t say enough good things about him."

However, Gipson balanced out his praise.

"Andy Dalton doesn’t get enough credit I think," Gipson said. "Andy Dalton has had a super fine camp man and obviously I’m seeing it up close, and it’s a good problem to have when you have two quarterbacks that you’re super comfortable with going and playing in a game on Sundays man."

The type of praise that Fields has received can turn a young head in the NFL.

Teammate Khalil Mack knows a good deal about fan adoration himself and thinks Fields can cope.

"He can handle it," Mack said. "You can kind of tell it doesn’t get to him, if that makes sense, because I’ve been around him and heard a few calls for him.

"You can kind of tell that he’s a humble guy, and won’t really let none of that kind of get to his head."

NOTES: Defensive end Akiem Hicks left Tuesday’s practice during warmups and the team offered no explanation. ... Running back David Montgomery returned to practice on a limited basis following what had been labeled general "soreness." ... With cornerback Desmond Trufant away for personal reasons, former Steelers cornerback Artie Burns took some first-team snaps as he tries to come back from a torn ACL suffered in last year’s camp.