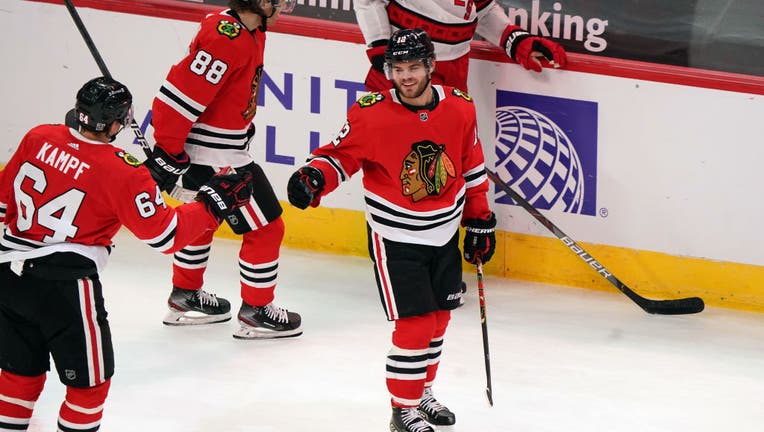 Chicago Blackhawks left wing Alex DeBrincat (12) celebrates with center David Kampf (64) and teammates after scoring a goal in action during a game against the Carolina Hurricanes on February 04, 2021 (Photo by Robin Alam/Icon Sportswire via Getty Im

CHICAGO - Alex DeBrincat and Patrick Kane combined for a strong finish for the Chicago Blackhawks.

Kane had a goal and three assists for the Blackhawks, who bounced back nicely after losing 4-3 to the Hurricanes in a shootout Tuesday night. Dominik Kubalik had a goal and two assists, and Mattias Janmark finished with a goal and an assist.

DeBrincat snapped a 4-4 tie when he converted a backhand off a rebound 12:22 into the third. Kane had the puck behind the net and fed Pius Suter, who was denied by James Reimer. DeBrincat then skated in for his third goal of the season.

"I was just trying to find a lane," DeBrincat said. "Kaner can do anything with the puck back there, so it’s your job to battle in front."

DeBrincat added an empty-netter with 12 seconds to play, assisted by Kane.

"He made a couple of huge plays with the game on the line there," Blackhawks coach Jeremy Colliton said.

Carolina had won five in a row. Sebastian Aho and Andrei Svechnikov each had a goal and an assist for the Hurricanes. Bob McGinn and Nino Niederreiter also scored.

The Blackhawks grabbed a 4-3 lead when Kane scored his sixth of the season 2:41 into the third. But the Hurricanes tied it again on McGinn’s wrist shot over the glove of Chicago goaltender Kevin Lankinen at 5:25.

Lankinen stopped 30 shots, including a big save on Teuvo Teravainen with nine minutes to play.

Carolina coach Rod Brind’Amour thought the game was lost before that.

"It was a special-teams loss tonight," Brind’Amour said. "We gave the game away in the first period. (Chicago) is a fast team and they’ve got skill. We got sucked into that game, trading chances."

Niederreiter and Svechnikov scored eight seconds apart in the first minute of the second to tie the game at 3. Niederreiter snuck behind defenseman Nicolas Beaudin to backhand a puck past Lankinen 42 seconds into the period, and Svechnikov pounced on Lankinen’s big rebound of Dougie Hamilton’s shot.

"We were definitely sloppy," Hamilton said. "The PK was pretty bad. We played them two days ago. We should know how to play against them."

Janmark tied it at 3:17, beating Reimer with a backhand in front. Kubalik gave Chicago a 2-1 lead with Martin Necas off for tripping at 14:43, and Andrew Shaw made it 3-1 by backhanding Kane’s bullet pass into the net while Brady Skjei was serving a tripping penalty.

Reimer made 29 saves in picking up his first loss of the season.

Brind’Amour said Necas will be evaluated Friday after hitting his head on the ice in the final minute.

The Blackhawks have three players (Adam Boqvist, Lucas Wallmark and Ryan Carpenter) remaining on the NHL’s COVID-19 list. Carolina’s Jesper Fast was the final Hurricane to come off the list, following the team’s nine-day pause after an outbreak. He had missed four games. Brind’Amour remains concerned, even after the league added additional restrictions on Thursday, including removing the glass behind the benches.

"It’s hard to avoid," Brind’Amour said. "We try to limit the contact as much as possible as everybody tells you to do, but it’s still hard to avoid."

Hurricanes: At Columbus on Sunday.

Blackhawks: At Dallas on Sunday.