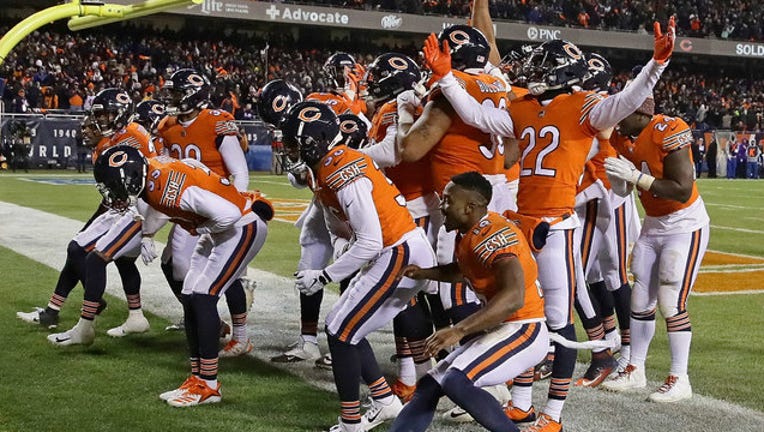 Members of the Chicago Bears defense celebrate an interception for a touchdown by Eddie Jackson #39 (L) at Soldier Field on November 18, 2018 in Chicago, Illinois. The Bears defeated the Vikings 25-20. (Jonathan Daniel/Getty Images)

ROSEMONT, Ill. (AP) - To Hall of Fame defensive end Richard Dent, the Chicago Bears sure have the look of a champion.

Dent sees striking similarities between the current team and the 1985 shufflin' crew that brought home the founding NFL franchise's lone Super Bowl championship. That team dominated like no other, and the current group still has some climbing to do to reach the same level.

How high the Bears can go remains to be seen. But in Chicago, optimism is soaring.

The Monsters of the Midway re-emerged last season, winning the NFC North at 12-4 in coach Matt Nagy's first season and making the playoffs for the first time since 2010. The defense, led by All-Pro edge rusher Khalil Mack, ranked among the best in the NFL.

The Bears thought they were in position to make a run, only to have the season end on former kicker Cody Parkey's double-doink miss off the upright and crossbar in a wild-card loss to Philadelphia at Soldier Field.

As the Bears celebrate their 100th anniversary this weekend, the past and present are colliding.

Six Hall of Famers and 230 former and current players and coaches were on hand for the opening ceremony on Friday. The festivities continued Saturday with panel discussions featuring past and current Bears.

Hall of Famers Dick Butkus, Mike Singletary and Mike Ditka shared stories ranging from their interactions with George Halas to championship seasons and what propelled them.

Butkus recalled the seeds for becoming one of the most feared tacklers ever to put on a helmet and pads taking root as a high school running back at Chicago Vocational High School.

"I was just going more by what bothered me as a running back in high school," he said.

The Bears naturally are shining a bright light this weekend on a past that includes nine championships. They have 28 Hall of Fame busts on display as well as the Super Bowl XX Lombardi Trophy.

It's been a long wait for another one. But the jump the Bears made last year under Nagy no doubt energized their fan base as well as their alumni.

Can these Bears win it all?

Dent sees similarities to where the Bears were entering the 1985 season. Like the current group, they were coming off a brutal playoff loss - 23-0 to San Francisco the previous year in the NFC championship game.

That team had one of the most dominant defenses ever assembled with Dan Hampton, Singletary and Dent leading the way. Last season, Chicago had three All-Pros on defense with safety Eddie Jackson and cornerback Kyle Fuller selected along with Mack. Defensive end Akiem Hicks also made the Pro Bowl.

Dent said Mack will have to add "another wrinkle" to his game after five seasons because "there's a lot of film out there" on him and "father time's gonna catch up." But he also has plenty of help, with Hicks and linebacker Roquan Smith creating havoc and Jackson and Fuller anchoring the secondary.

"You can't double everybody," Dent said. "That's just like us."