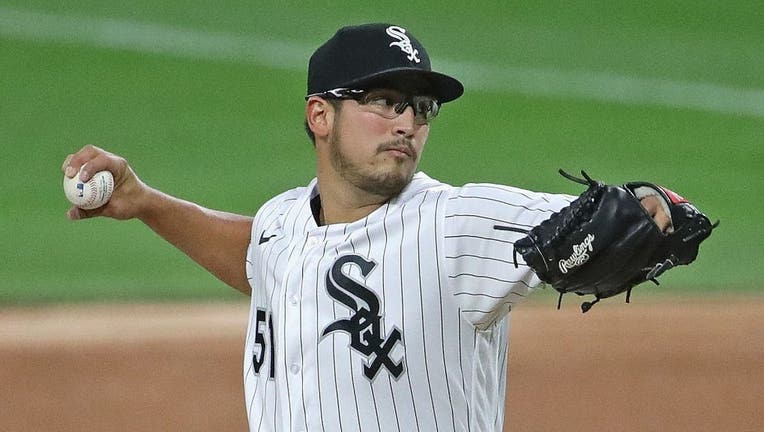 Starting pitcher Dane Dunning #51 of the Chicago White Sox delivers the ball against the Minnesota Twins at Guaranteed Rate Field on September 15, 2020 in Chicago, Illinois. (Photo by Jonathan Daniel/Getty Images)

CHICAGO - Pitching in a big game during a pennant race, Dane Dunning resembled a seasoned veteran in only his fifth major league start.

He had some company, too. No longer just a bunch of promising young kids, the Chicago White Sox are looking down at the rest of the American League.

Dunning tossed seven effective innings, Luis Robert had a key two-run single and the White Sox strengthened their hold on the AL Central by topping the Minnesota Twins 6-2 Tuesday night.

Dunning (2-0) permitted one earned run and three hits in by far his biggest start since his Aug. 19 debut. Appearing poised and confident, the 25-year-old right-hander struck out seven and walked two in the longest outing of his career.

“I feel really comfortable right now,” Dunning said. “The debut, obviously the nerves are a little bit high, but after that, I feel like I’ve been pretty calm, pretty collected. Just trying to go out there and throw strikes.”

Tim Anderson and James McCann homered as Chicago (32-16) posted its sixth straight win and moved three games ahead of second-place Minnesota, which won the AL Central last year. The AL-best White Sox also moved 16 games over .500 for the first time since they were 71-55 on Aug. 26, 2012.

“You look up and down our lineup and there’s no breaks,” McCann said.

“I’m not really happy with the way I’ve been pitching,” Dobnak said. “I haven’t really been getting ahead of guys. That’s kind of my game: attack the guys. Get them first-pitch strikes.”

Twins manager Rocco Baldelli and designated hitter Nelson Cruz were ejected by plate umpire Will Little after Ryan Jeffers took a called third strike for the final out of the seventh. It was third career ejection for both.

Buxton showed off his breathtaking speed in the third, tying it at 1 when he raced around the bases for his ninth homer. Buxton’s drive to deep center caromed off the wall after Robert tried to make a leaping catch, and Buxton scored easily with a stylish headfirst slide.

“Just another display by Byron of him showing us things that we don’t normally get the opportunity to see on a baseball field,” Baldelli said. “We know how special his abilities are, and watching him run around the bases, it’s a joy to watch.”

Buxton and the Twins thought he had an inside-the-park homer in the ninth inning of Monday’s 3-1 loss, but it was changed to a ground-rule double after a replay review led to a ruling that his liner to left was lodged at the bottom of the wall.

This time, Buxton got to keep his first inside-the-park homer since Aug. 18, 2017. But the White Sox went ahead to stay with three runs in the bottom of the third.

McCann hit a tiebreaking double, and Robert followed with a liner back up the middle against a drawn-in infield. McCann and José Abreu scored to give Chicago a 4-1 lead.

After Buxton singled and scored on Jeffers’ groundout in the fifth, Chicago responded with solo homers by Anderson in the sixth and McCann in the seventh.

Anderson had three hits and scored twice, and Abreu also finished with three hits. Anderson and Abreu are both strong contenders for the AL MVP award.

WELCOME TO THE BIGS

Travis Blankenhorn started at second base for the Twins in his major league debut. He doubled in the ninth for his first career hit.

Twins: INF Marwin Gonzalez rested a day after he was scratched due to an illness. Baldelli said Gonzalez was feeling much better. “I don’t think he’s going to miss very much time,” Baldelli said. ... INF Miguel Sanó (neck stiffness) and OF Eddie Rosario (left elbow) returned to the starting lineup.

White Sox: LHP Jace Fry threw 1 1/3 scoreless innings after he was reinstated from the 10-day injured list. He had been sidelined by back spasms. “I got a shot in my back to help out and after that kind of set in, we took it slower,” Fry said. “I think I could have been back a few days ago. But they were being pretty safe with it and making sure I felt good before I got back on the mound.” LHP Bernardo Flores Jr. was optioned to the team’s alternate training site to make room on the roster.