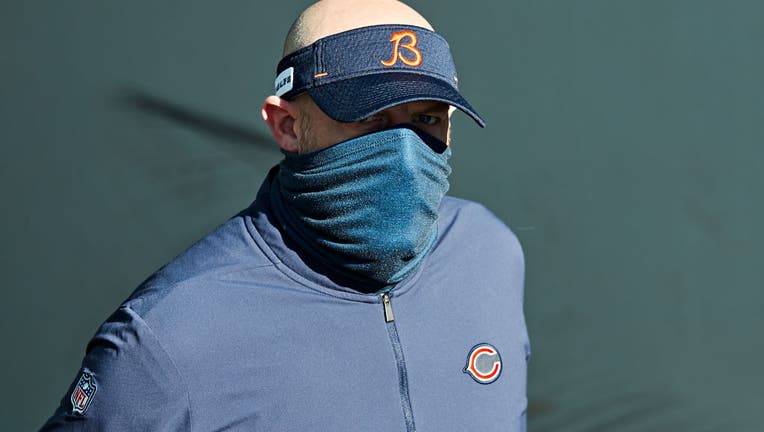 LAKE FOREST, Ill. - While the debate in Chicago over whether Andy Dalton or Justin Fields should be the Bears’ starting quarterback continued, coach Matt Nagy opted to take a pass.

He wasn’t about to play the comparison game a day after a season-opening loss to the Rams in Los Angeles.

He insisted that Dalton performed well and that he liked what he saw from Fields. He also sidestepped the question when asked what the veteran brings that the rookie does not.

"Without getting into the comparisons too much, I just think right now when we’re evaluating Andy I thought he did a good job of being able to put us in good situations," Nagy said Monday. "And then using Justin when we did, Justin did well, too."

Dalton started and threw for 206 yards in Chicago’s 34-14 loss. He got intercepted in the end zone on the game’s first possession right after Fields helped put the Bears near the goal line. The three-time Pro Bowler was also sacked three times.

Fields, the 11th overall draft pick, was in on only five plays. But he made the most of them, completing both of his passes for 10 yards. On his only rushing attempt, he scored from the 3.

Fields got in on the Bears’ fourth offensive play and completed a 9-yard pass to Marquise Goodwin to the Rams 3. But Chicago came away empty-handed when Dalton was picked off by David Long Jr. in the end zone.

The quarterback situation isn’t the only issue facing the Bears. They clearly have some work to do on defense after a shaky start under new coordinator Sean Desai.

David Montgomery picked up where he left off after a strong finish last season, running for 108 yards on 16 carries. That included a 41-yarder on the game’s opening possession and a 3-yard touchdown near the end of the first half.

So why didn’t Montgomery get more carries?

"I don’t think we abandoned the run game at all with him (Sunday)," Nagy said. "I thought we did a good job of giving him opportunities. He ran hard. There were some hard runs in there."

The Bears are counting on a defense that wasn’t quite so dominant last season to remain a strength. This was not a great start.

The Bears got picked apart by Matthew Stafford in his Rams debut to the tune of 321 yards, three touchdowns and a 156.1 rating. They gave up touchdown passes of 67 yards to Van Jefferson and 56 yards to a wide-open Cooper Kupp.

On top of that, they sacked Stafford once.

S Eddie Jackson had a rough opener. The former All-Pro missed several tackles, none more glaring than on Stafford’s touchdown to Jefferson early in the game. Jackson and safety Tashaun Gipson failed to put a hand on the receiver when he hit the ground near the 15 after hauling in the long pass. Instead, Jefferson got up and ran to the end zone.

Nagy called it "a learning experience" for the two veterans and insisted it’s not an indictment on Desai. "I know that Sean is teaching those guys the right thing to do, and I know that those guys will definitely learn from it," he said.

Nagy had no update on LT Jason Peters (quadriceps) and his backup, rookie Larry Borom (ankle), after both players exited on the same drive in the third quarter.

20 — The Bears did not have a completion of 20 yards or more. The longest was Dalton’s 19-yarder to Marquise Goodwin in the first quarter.

The Bears meet Dalton’s former team when they host Cincinnati in their home opener. He beat the Bengals last season playing for the Dallas Cowboys, throwing for two touchdowns in a 30-7 win.