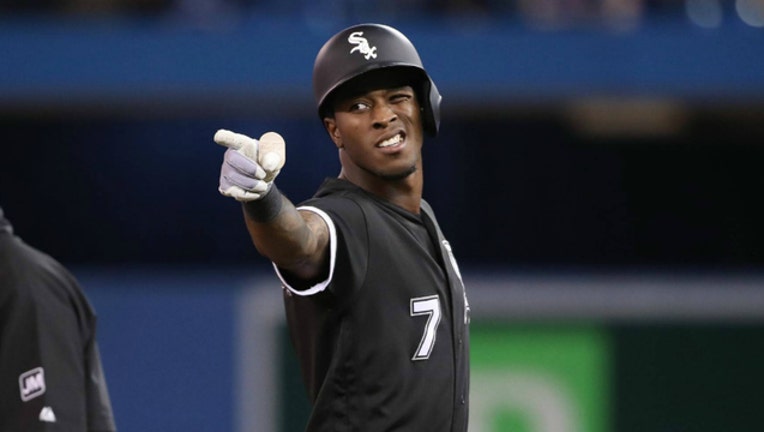 Grichuk's two-out blast in the first inning was his sixth of the season and came off starter Dylan Covey (0-2). The homer gave the Blue Jays more runs with one swing than they scored in a three straight losses to Minnesota earlier this week. Toronto was shut out in the first two games and lost 9-1 in Wednesday's series finale.

Hernandez added a leadoff homer in the second inning, his third of the season. Hernandez hadn't homered since April 18, at Minnesota.

Toronto's scheduled starter, right-hander Clay Buchholz, was scratched and placed on the 10-day injured list because of a sore shoulder. Right-hander Daniel Hudson opened for Toronto, the first time this season the Blue Jays used an opener.

Hudson allowed a run in the first on back-to-back doubles by Yoan Moncada and Jose Abreu.

Chicago's Tim Anderson hit a solo homer off Sam Gaviglio in the fifth, and the White Sox cut it to 4-3 on Leurys Garcia's RBI groundout in the seventh.

Joe Biagini (2-1) came on and struck out Moncada for the final out of the seventh, stranding a runner at third. Biagini pitched the eighth before Ken Giles got Charlie Tilson on a fly ball to the warning track for the final out for his ninth save in 10 chances.

Blue Jays prospect Vladimir Guerrero batted second, the highest he's hit in the order since his promotion to the majors. Guerrero grounded into a double play in the first, grounded out in the third, fouled out in the fifth and flied out in the seventh. The hitless performance dropped his average to .146.

White Sox: OF Eloy Jimenez (right ankle) ran the bases before the game. He's expected to do so one more time over the weekend before beginning a rehab stint.

White Sox: Minor league OF Preston Tucker was released and signed with a team in the Korean Baseball Organization. ... Triple-A Charlotte acquired OF Paulo Orlando in a trade with the Los Angeles Dodgers' organization.

Blue Jays: Toronto selected RHP Javy Guerra from Triple-A. OF Socrates Brito was designated for assignment. Acquired from San Diego on April 2, Brito hit .077 in 17 games, striking out 17 times in 39 at bats.

Blue Jays: RHP Marcus Stroman (1-5, 2.96) allowed a season-worst six runs in his previous start on May 6 against Minnesota. He's 2-3 with a 5.45 ERA in seven career starts against the White Sox.