The Bears tweeted Monday morning that Nagy and Pace had been let go.

Bears chairman George H. McCaskey is slated to address the media at 1 p.m. from Halas Hall.

Sunday's season finale loss against the Minnesota Vikings was their last game.

Nagy posted a 34-31 record with the Bears, going 1-7 against the division rival Green Bay Packers.

FOX 32's Lou Canellis weighs in on the reported firing of head coach Matt Nagy and general manager Ryan Pace and where the Bears organization goes from here.

Nagy was touted as an offensive guru when he was hired by the Bears in 2018. The Bears made a worst-to-first leap in his first year after John Fox led them to a 14-34 record over three seasons and the second-worst winning percentage by a Chicago coach.

Nagy was chosen Coach of the Year. This season, the Bears rank among the bottom five teams in total offense.

Pace, who swung a blockbuster trade with Oakland for star pass rusher Khalil Mack just before the 2018 season, took top executive honors from The Sporting News.

The team went 48-65 during his seven-year tenure. 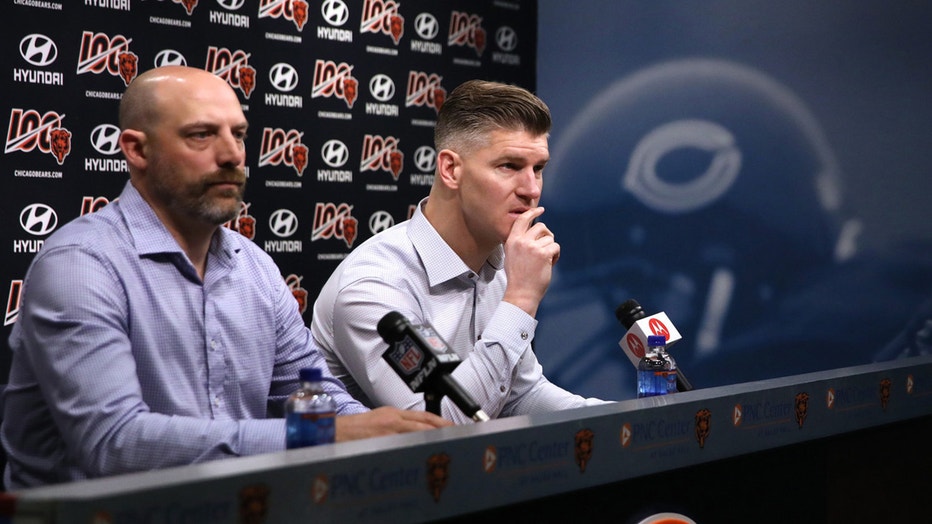 Pace’s reign was marred by his inability to settle the quarterback position. He whiffed when he traded up a spot to draft Mitchell Trubisky over Patrick Mahomes with the No. 2 pick in 2017. He also signed Mike Glennon, traded for Nick Foles and paid up for Andy Dalton. And rookie Justin Fields’ future is an ongoing question.

The Bears made the playoffs twice in Nagy's four-year stint with the team but failed to win either game, including the infamous "double-doink" loss against the eventual Super Bowl champion Philadelphia Eagles.

Chairman George McCaskey opted to stick with Pace and Nagy last January after Chicago went 8-8 in the regular season for the second year in a row. He seemed to tie them together at the time when he cited a culture they set that allowed the team to bounce back from a six-game losing streak to make the playoffs — as the seventh and final seed in an expanded field. Chicago lost in convincing fashion at New Orleans, but McCaskey insisted Pace and Nagy were "the best people to lead us in 2021."

The Bears were never really in contention this season.

Nagy has been on the hot seat for most of the year fueled by a mid-season stretch where the team dropped eight of nine contests.

"I’ve never been in this position before. I continue to just go about business like normal. I mean that," Nagy said after Sunday's 31-17 loss. "I know this, whatever is supposed to happen will happen. I’m a positive person."

People have been yelling, 'Fire Nagy' at Bears games and even at Nagy's son's football game this past weekend.

Bears running back David Montgomery said the firings were pretty emotional for him.

"Pace and Nagy took a chance on a poor kid from Cincinnati, they stuck their neck out on the line for me and I appreciate that," Montgomery said.

The Bears have not won in the postseason since the 2010 team advanced to the NFC championship game.

The new coach will have to unlock the potential in Fields after an uneven rookie season for the No. 11 overall draft pick. Though he flashed the physical skills, he had more interceptions (10) than touchdown passes (seven) and an unimpressive 73.2 passer rating. The Bears were 2-8 in the games he started and lost the final seven with him in the lineup after wins over Detroit and Las Vegas in Weeks 4 and 5.

Minnesota Vikings head coach Mike Zimmer and Miami Dolphins head coach Brian Flores were among those who have been let go, according to reports and team officials.