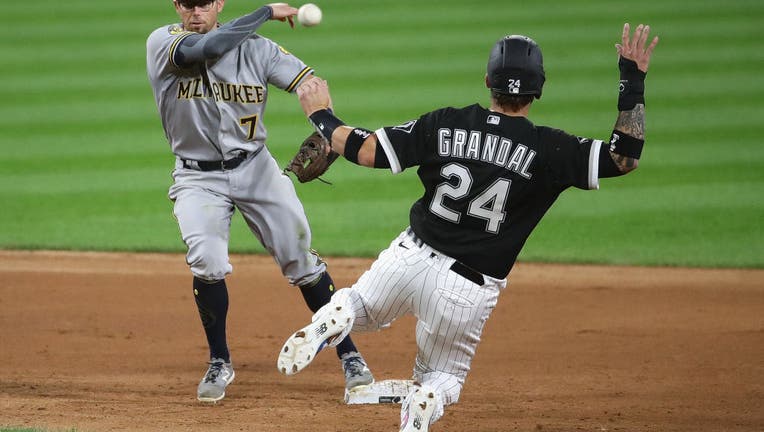 CHICAGO, ILLINOIS - AUGUST 05: Eric Sogard #7 of the Milwaukee Brewers turns a double play over Yasmani Grandal #24 of the Chicago White Sox in the 7th inning at Guaranteed Rate Field on August 05, 2020 in Chicago, Illinois. The Brewers defeated the

Milwaukee held struggling star Christian Yelich out of the lineup, with the 2018 NL MVP and two-time defending NL batting champion mired in a season-opening 3-for-34 slump.

The Brewers stopped Chicago’s best streak since a six-game run in April 2017. The White Sox won the previous two nights at Miller Park.

Houser (1-0) simply dazzled on a night when Dallas Keuchel (2-1) was about as good for Chicago. The 27-year-old right-hander gave up five hits and struck out five for the win.

Eric Sogard drove in Mark Mathias with a single in the third, and that was all Milwaukee needed.

Keuchel struck out eight over seven innings while allowing one run and five hits. The 2015 AL Cy Young Award walked one, but fell to 0-5 in six starts against the Brewers.

Chicago had two on in the sixth after Mendick doubled and Yoan Moncada reached on an infield single. But after hitting a tiebreaking single the previous night, Jose Abreu struck out to end the threat.

David Phelps worked the eighth for Milwaukee. Josh Hader retired all three batters in the ninth for his second save in as many chances.

White Sox: Madrigal is headed to the 10-day injured list and might need offseason surgery, GM Rick Hahn said. Hahn was optimistic Madrigal (separated left shoulder) will return by the end of the month, after the rookie was hurt sliding into third on Tuesday. ... Encarnación is day to day after leaving Tuesday’s game because of inflammation near his left shoulder, in the joint between his collarbone and sternum. ... Hahn said SS Tim Anderson (strained right groin) will begin workouts at the team’s auxiliary site on Thursday. ... Hahn is also optimistic LHP Carlos Rodon and RHP Reynaldo Lopez will return from in the next few weeks after being sidelined because of soreness in their pitching shoulders.

RHP Josh Lindblom (0-0 4.91 ERA) starts for Milwaukee with LHP Gio González (0-0, 7.36 ERA) getting the ball for Chicago. After two seasons in the Korean Baseball Organization, Lindblom had his first major league start since 2017 cut short because of back spasms when he lasted 3 2/3 innings against Pittsburgh last week. Gonzalez pitched scoreless ball into the fourth against Kansas City in his first start for the White Sox, 16 years after they drafted him.