In an August 2016 interview, Colin Kaepernick explains his refusal to stand during the national anthem while serving as the San Francisco 49ers quarterback.

MIAMI - During the premiere of the 2020 NFL season on Sept. 10, the Houston Texans remained in their locker room during the national anthem before they faced off against the Kansas City Chiefs in a coordinated display that the Miami Dolphins said they intended to echo in their own game on Sunday.

The anthem ahead of the Thursday night game was performed by R&B duo Chloe X Halle from an empty stadium and streamed on video screens. As soon as it was over, the Texans and their coaching staff ran out of the tunnel in the corner of Arrowhead Stadium.

The Chiefs stood along their sideline during the anthem. Most of them had their hands over the hearts.

The two teams then met at midfield to shake hands while messages such as “We believe Black lives matter” and “It takes all of us" played on the screen. They then lined up from end zone to end zone in a show of solidarity before the coin toss.

The move came following an announcement by the Miami Dolphins planning a similar protest in response to racial injustice in the U.S.

The NFL announced it will play “Lift Ev’ry Voice And Sing,” which is also known as the black national anthem, before every Week 1 NFL game in the 2020 season. The song will be played before “The Star-Spangled Banner.” 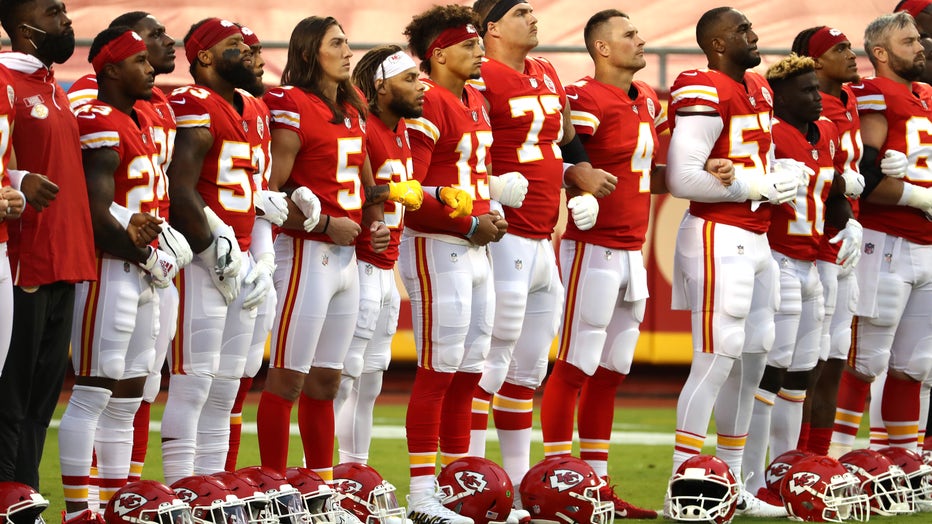 Members of the Kansas City Chiefs stand united for with locked arms before the start of a gam against the Houston Texans at Arrowhead Stadium on September 10, 2020 in Kansas City, Missouri. (Photo by Jamie Squire/Getty Images)

In a video shared on Twitter by ESPN’s Jay Williams, Miami Dolphins players announced that they will stay inside during both national anthems.

Players of the Dolphins ask in a video shared to Williams’ Twitter account, “Is it authentic? That’s the mystery. Or is it just another symbolic victory?”

“Before the media starts wondering and guessing, they just answered all your questions. We’ll just stay inside,” Flores says at the end of the video.

The announcement comes amid the league’s return to play during a reckoning of social justice occurring across the country along with a global pandemic.

Miami will face the New England Patriots on Sunday.

RELATED: ‘End Racism’ and ‘It Takes All of Us’ will be displayed on NFL end zone borders for season home openers

Other actions by the NFL included the announcement change to the end zones consisting of bold font that spells out the messages: “End Racism” and “It Takes All of Us,” for home openers, according to NFL Network reporter Tom Pelissero. The NFL reporter tweeted the announcement from a memo that was sent out by NFL executive Anna Isaacson.

Players will also have the option to wear helmet decals that honor victims of systemic racism as the NFL attempts to amplify its stance on social justice in the wake of worldwide protests since the death of George Floyd in May. Floyd, a Black man, died during an encounter with Minneapolis police when a White officer pressed his knee on Floyd’s neck.