CHAMPAIGN, Ill. - Lovie Smith understands the challenge his team will face this weekend.

Illinois is coming off wins against Akron and UConn to open the season, but will host Eastern Michigan on Saturday while dealing with injury issues to some of its best players.

Led by quarterback Mike Glass III, the Eagles (1-1) hope to get their second bowl bid in two years. They are coming off a loss to Kentucky, but played a much better second half -- and Smith knows it.

"We know we'll have a good Eastern Michigan team coming in," he said. "Bowl team that upset Big Ten opponents last year. Played Kentucky strong this past week. We need to make improvements in all areas."

Running back Reggie Corbin, who gained more than 1,000 yards for Illinois last season, suffered a hip pointer in the opener against Akron, missed the UConn win and is questionable against Eastern Michigan.

"We missed him a lot last week," Smith said. "Injuries are tough to predict, (such as) how long it will take to recover. Hopefully, Reggie will be ready to go this week."

Corbin's backup, Mike Epstein, also was injured in the opener and is out for the season. If Corbin is unable to play on Saturday, Jakari Norwood and Dre Brown will again shoulder the load for the Illini (2-0). 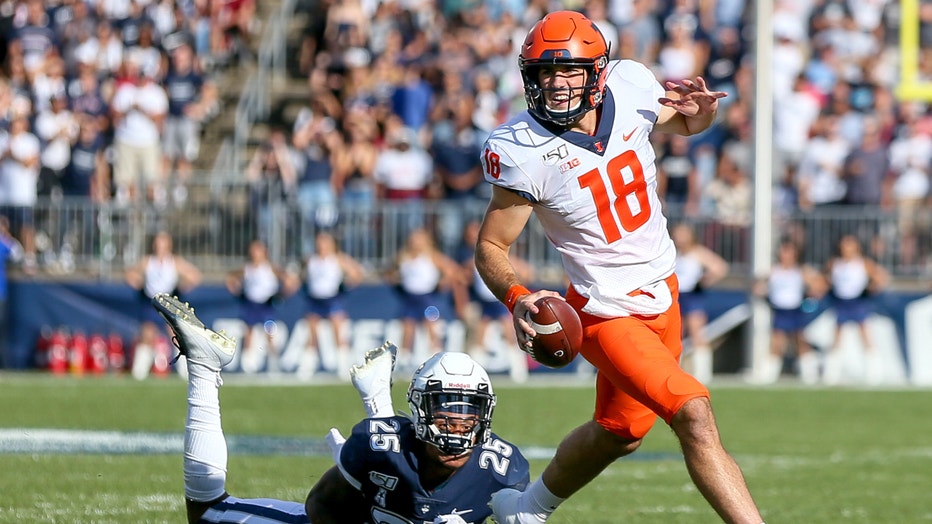 The Eagles must find a way to contain Illinois graduate transfer quarterback Brandon Peters, who has completed 65.5% of his passes for 390 yards, seven touchdowns and one interception.

"Illinois has a pretty good quarterback," Eastern Michigan coach Chris Creighton said. "He's very effective in that he can throw and run the ball. It's a balanced offense and we're going to need a full defensive effort to stop them."

Glass has looked good this season for the Eagles, completing 54 of his 75 passes for an average of 262 yards per game, with five touchdowns and two picks. Glass's favorite targets are Mathew Sexton, who leads all Eagles receivers with 51 yards, followed by Quian Williams and Dylan Drummond.

Eastern Michigan is allowing 30.5 points and 419.5 yards per game. Terry Myrick leads the Eagles with 18 tackles, Turan Rush has one sack and Clay Holford has one interception. Illinois has given up 13 points and 238.5 yards passing per game while holding opponents to just 1.1 yards per carry. Nate Hobbs leads the Illini with 14 tackles, Oluwole Betiku Jr. has five sacks and Michael Marchese has one interception.

Illinois is desperate to get off to a good start in Smith's fourth season in charge, and a win would give the Illini its first 3-0 under the former NFL coach. He has been mentioned as a coach on the hot seat nearly every year since he took the job.

"They beat Purdue last year, they've been in multiple bowl games. Just watch the film. Turn the film on, watch how they play, how sound they are fundamentally. This'll be the best team we've played this year, and we better be ready to roll," he said.

The Eagles' ground game is averaging 76 yards per game, with Shaq Vann leading the way with 93 yards on 30 carries. The second-half effort against Kentucky has given them confidence going to Champaign.

"We feel like we forged our identity as a team during that Kentucky game," Creighton said. "We believe we can become what we believe we are."