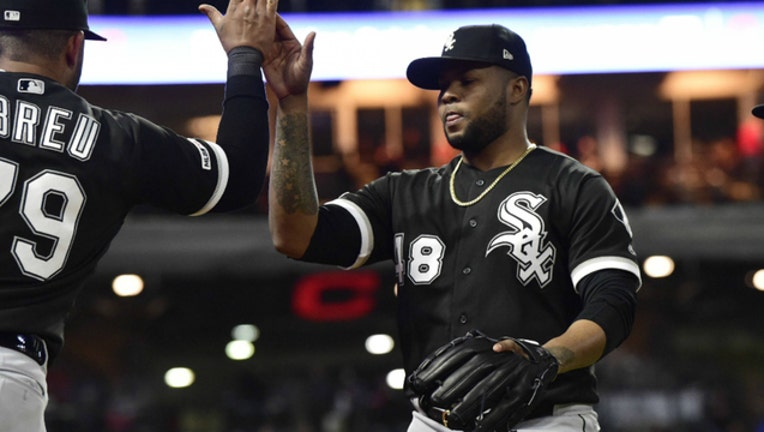 The Indians aren't hitting or scoring or looking anything like a team capable of winning many games in May or June, never mind in October.

"That's not easiest thing to do," he said after Cleveland was blanked 2-0 by the Chicago White Sox on Tuesday night. "You show up and you want to win so bad, but sometimes you got to be patient even when you don't want to be."

Lucas Giolito carried a shutout into the eighth inning and closer Alex Colomé pitched out of an eventful jam as the White Sox recorded their first shutout of 2019.

Giolito (3-1) didn't have to work hard against the Indians, who came in batting an AL-low .213 - 13 points lower than the next closest team, and 62 behind the league-leading Houston Astros.

The powerless Indians wasted a strong outing by starter Jefry Rodriguez (0-2) and were shut out for the second time in three games. Cleveland has scored just one run in the past 27 innings.

Francona keeps saying the hits will start to fall in, but to this point that hasn't happened.

"I believe in our guys and you can't just pat them on the back when things are going great," he said. "That's the easy part. When it's not looking so rosy, that's when you gotta really keep at it. So that's what we're going to do."

Giolito, who allowed just three hits, retired the leadoff hitter to start the eighth. The right-hander was lifted after 105 pitches for reliever Jace Fry, who got the second out before the Indians loaded the bases on a single, double and walk.

Chicago closer Alex Colomé came in and appeared to get two quick strikes on Carlos Santana. But third base umpire Marty Foster ruled Santana checked his swing on a 0-1 pitch, and ejected manager Rick Renteria, who came out of the dugout and argued along with waving his arms in disgust.

Colomé then struck out Santana, freezing him on a 3-2 pitch that appeared low. The right-hander then worked the ninth for his seventh save in seven tries.

Cleveland had scoring chances in the fourth, sixth and eighth with Santana at the plate. He's been their best hitter all season, but couldn't come through.

"That's kind of the way the game goes when you hit a little bit of a rough patch," Francona said.

They'll represent the club at community and promotional events leading up to All-Star activities.

The trio of stars surprised a group of youngsters invited to play Tuesday in a pickup game at Progressive Field. When Alomar, who was the All-Star MVP in 1997 when it was last hosted by Cleveland, clobbered a pitch over everyone's heads, Thome rounded third and said, "Just like old times."

Thome and Alomar were teammates on Cleveland's powerhouse teams in the 1990s.

The White Sox improved to 3-1 against the Indians. Chicago was just 5-14 against the three-time defending AL Central champions a year ago.

White Sox: RHP Kelvin Herrera (lower back stiffness) was unavailable for the second straight game. He allowed a career-high five runs in 2/3 of an inning Sunday against Boston.

Indians: RHP Mike Clevinger (back strain) continues to make solid progress toward a return. He's throwing two straight days and taking a day off. Francona said Clevinger, who has been out since April 7, should be throwing bullpens in the "not-too-distant future."