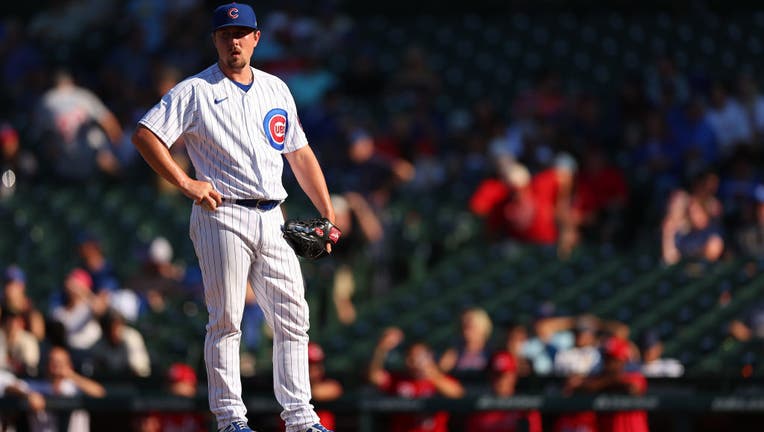 CHICAGO, ILLINOIS - SEPTEMBER 08: Mark Leiter Jr. #62 of the Chicago Cubs reacts after allowing a run against the Cincinnati Reds during the ninth inning at Wrigley Field on September 08, 2022 in Chicago, Illinois. (Photo by Michael Reaves/Getty Imag

CHICAGO - Jonathan India hit a tiebreaking RBI single in the ninth inning, and the Cincinnati Reds rallied for a 4-3 victory over the Chicago Cubs on Thursday.

Chicago was ahead 3-2 when Alejo Lopez’s liner off Mark Leiter Jr. (2-7) slipped between rookie right fielder Seiya Suzuki and center fielder Rafael Ortega and rolled to the wall for a triple, allowing Nick Senzel to score from first to tie it. Lopez trotted home on when India lined a single to left, his third hit of the game.

Suzuki doubled and scored in the sixth and put Chicago in front with a solo shot in the eighth. His 12th homer was a liner into the first row of Wrigley Field’s left-center bleachers off Alexis Diaz.

Diaz (6-2) got five outs for the win. Ian Gibaut worked around a hit in the ninth for his first save.

Kyle Farmer led off the seventh with a solo shot to chase Cubs starter Adrian Sampson, who allowed one run on five hits and walked none. Kyle Farmer and Jake Fraley each had two hits for the Reds, who have won two straight and three of four.

Nico Hoerner tripled and doubled. Franmil Reyes and P.J. Higgins drove in runs for the Cubs, who have lost nine of 11.

Reds starter Luis Cessa permitted two runs on three hits in 5 2/3 innings. The right-hander struck out eight and walked none in his longest outing since tossing six innings on July 9, 2018 with the Yankees.

Cessa retired 12 of the first 13 Cubs batters and didn’t allowed a hit until Hoerner lined a triple off center fielder TJ Friedl’s glove to lead off the bottom of the fifth. Cessa made his fourth start since joining the Reds’ rotation on Aug. 22 and fifth this season.

Hoerner drove Cessa’s first pitch in the bottom of the fifth to straightaway center. Friedl raced back and got his glove on the ball at the warning track, but the ball glanced off the webbing.

Friedl absorbed a hard hit against the wall and threw to third, but Hoerner dove in ahead. He scored on Higgins’ sac fly to medium center when Friedl threw up the line.

Freidl lost the ball in the sun on Suzuki’s double to deep right-center with two outs in the sixth. He was in position to make the catch, but the ball fell over his shoulder.

Buck Farmer relieved Cessa, and Reyes followed with an RBI single to make it 2-0.

Rowan Wick, the third Cubs reliever, entered with two outs and two on in the top of the eighth and Chicago ahead 2-1. The righty walked Fraley and rookie Spencer Steer to force in the tying run.

Friedl also appeared to lose Hoerner’s double to short center in the seventh in the sun.

The Reds released INF Colin Moran after designating him for assignment on Tuesday.

Reds: Senzel was back in the lineup at DH after missing two games with a right ankle sprain. ... RHP Connor Overton, out since May 17 (lower back), threw 29 pitches in a game at the Reds training complex in Goodyear, Arizona, on Wednesday, manager David Bell said. Overton is expected to pitch at Triple-A Louisville on Tuesday. ... Rookie RHP Daniel Duarte (elbow inflammation) was sent on rehab assignment to Louisville. He’s been out since April.

Cubs: All-Star C Willson Contreras, out since Aug. 30, had an MRI confirming his left ankle sprain, a result manager David Ross said was encouraging. Contreras suffered the injury in the Field of Dreams game against the Reds in Dyersville, Iowa, on Aug. 11. He continued playing, but the injury worsened and he was placed on the 10-day IL retroactive to Sept. 2. ... INF Patrick Wisdom (left ring finger sprain) took batting practice on Thursday. ... RHP Keegan Thompson (low back tightness) is scheduled to throw a bullpen session on Friday.