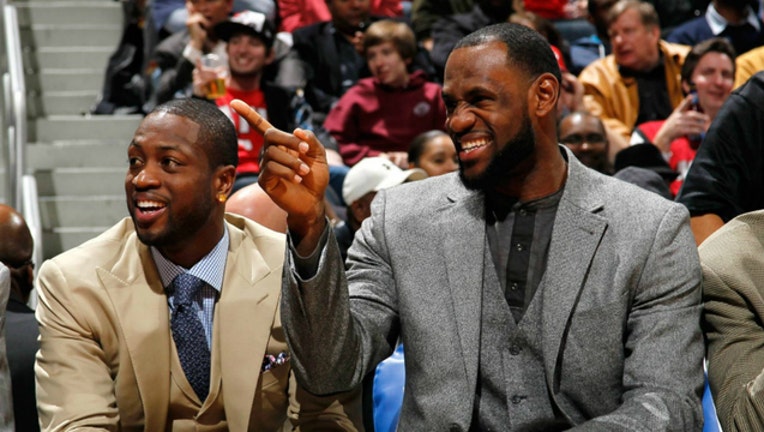 LeBron James #6 and Dwyane Wade #3 of the Miami Heat converse with a fan in the stands during the game against the Atlanta Hawks at Philips Arena on January 5, 2012 in Atlanta, Georgia. (Photo by Kevin C. Cox/Getty Images)

The wake-up calls for Dwyane Wade were coming at 5:45 a.m. for much of the summer. An hour or so later, he and LeBron James would be in the gym together working on their games.

And the chemistry was as good as ever.

"He drives me to want to be better," Wade said.

They'll be grinding together on a daily basis now.

Wade signed a one-year, $2.3 million deal with the Cleveland Cavaliers on Wednesday to reunite with James, with whom he went to four NBA Finals and won two championships in Miami. Wade's deal was finalized quickly after he cleared waivers, which he had to do after getting a buyout from the Chicago Bulls over the weekend.

"I'm all about the challenge," Wade told The Associated Press. "If I didn't want the challenge, I would have stayed in Chicago. But I wanted the challenge of being back on that big stage and playing in those moments and seeing what I've got. So I'm not going to talk about what I've got. I want to go out there and show, when the lights are the brightest and the games are the biggest, that's when I'm alive. And I need that."

He took a hard look at going back to Miami, listened to sales pitches from Paul George and Carmelo Anthony in Oklahoma City, even considered San Antonio and got a call from Golden State.

But in the end, he wanted to play again with James - someone Wade calls his brother.

"I definitely think I can help him in different ways," Wade told the AP via phone as he sat in his new locker room. "He is, in today's game, the greatest basketball player that we have. So he doesn't need me to help him be great. But there's other areas that I've been able to be there, to help him think about things a certain way. He knows I'm going to put the work in with him. He knows I'm going to be right there."

Earlier Wednesday, James said he feels like a little kid having Wade with him again.

"Come on, man, this is like one of my best friends," James said after the first of Cleveland's two practices on the day - the second one set to be Wade's first with the Cavs. "It's kind of like when you start school and you walk into the classroom and you're not quite sure who your classmates are and when you walk in there and one of your best friends is in there, you're like: 'Oh, yeah, this is going to be fun. It's going to be a good class.'"

A good team, too.

Wade and James spent four seasons together with the Heat, winning two championships and making the Finals four times as a duo as devastating as any in league history. They'll now join forces on a Cleveland team that saw Kyrie Irving traded to Boston and the roster get remodeled by adding Isaiah Thomas, Jae Crowder, former league MVP Derrick Rose and free agents Jeff Green and Jose Calderon.

Wade has talked to coach Tyronn Lue about his role and seems assured that he'll be in the mix for a starting job.

"You want to earn your spot, but I definitely wanted to make sure it wasn't something that was off the table," Wade said. "I don't want ever to be given anything in this league. I want to feel like I earned it. That's kind of how you want it coming to a new team. ... This is a deep team. That really excited me about the potential of this team and what you need to compete with a Golden State. You need a deep team to compete with them."

Wade has said many times that a fourth ring isn't a make-or-break goal for him. His legacy is secure. He's a certain Hall of Famer. He's one of the best to ever play the game.

That doesn't mean another title is irrelevant, though. And he gave back about $8 million in the buyout with the Bulls to get this chance, after taking smaller-than-he-could-have-gotten deals in Miami multiple times to help the Heat and their championship quests.

"I want to compete for it," Wade said. "I've always said if I don't win another one, it's not going change the course of my career and what I've been able to accomplish. But as everyone knows, as has been very highly documented, some of it documented the wrong way, I've probably given back the most money of any player in NBA history. And it's always been to be in position to compete for a championship."

The Cavaliers have been to the last three NBA Finals; add the Miami years in there, and James has been to the title round in seven consecutive seasons.

"When you play this sport, getting to those moments, getting to the Eastern Conference finals, the Finals, that's when you feel alive," Wade said. "And I haven't felt that in a couple years. And I wanted to make sure I put myself in that position. If I don't win one, my career path is not going to change, but damn it sure will feel great."