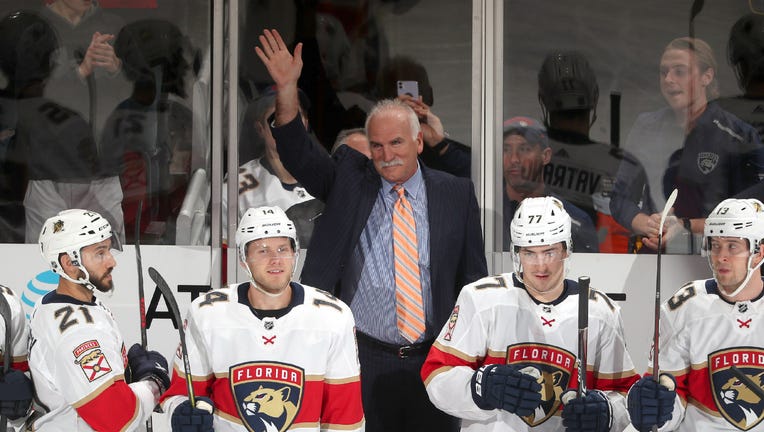 Florida Panthers head coach Joel Quenneville is recognized in the first period of the game between the Chicago Blackhawks and the Florida Panthers at the United Center on January 21, 2020 in Chicago, Illinois. (Chase Agnello-Dean/NHLI via Getty Images / Getty Images)

CHICAGO - Joel Quenneville barking out instructions from behind the bench. A young team with a couple budding stars showing signs of improvement.

It was a familiar scene, with quite a twist.

The Florida Panthers got Quenneville a win in his return to Chicago, using a hat trick by Frank Vatrano to beat the Blackhawks 4-3 on Tuesday night for their sixth consecutive victory.

“Made it a little interesting at the end of the game, but that was certainly a memorable event that I’m thankful for,” Quenneville said.

The 61-year-old Quenneville coached Chicago to three Stanley Cup championships and nine playoff appearances in 10-plus years before he was fired when the team got off to a lackluster start last season. He was hired by Florida in April, and the former NHL defenseman was showered with love in his first game back at the United Center.

The crowd of 21,559 roared and bellowed “Q!” during a sustained standing ovation after the Blackhawks aired a tribute video during the first period. One fan held up a sign that read “ThanQ.”

“I think that ovation was incredible,” Chicago captain Jonathan Toews said. “I think all of us that played for him were all smiles.”

Quenneville grinned while he watched the video on the scoreboard, and then waved and mouthed “Thank you” while the crowd cheered.

“It was special. It was kind of like saying thank you to me, and I was thanking them,” Quenneville said, “and it was all good. It felt great.”

The Panthers (28-16-5) won for the seventh time in eight games overall, including a dramatic 5-4 victory at Minnesota on Monday night. They head into the All-Star break in prime position for their first playoff appearance since 2016.

It was reminiscent of the young team Quenneville inherited when he took over the Blackhawks four games into the 2008-09 season.

“We still got tons of work to do, but there’s some upside here,” Quenneville said.

“I let in a couple of goals that kinda hurt us a bit,” Lehner said. “That’s tough, but it’s part of hockey. I’ve just got to regroup and go on another run.”

The Blackhawks honored Kane before the game after he recorded his 1,000th career point during Sunday’s 5-2 victory against Winnipeg. The All-Star forward was presented with an engraved gold puck and crystal commemorating the achievement.

Quenneville also had a smile on his face while he watched the ceremony paying tribute to one of the players who rose to stardom while he was in Chicago.

Kane extended his point streak to 11 games when he drove a big slap shot by Bobrovsky with 1:15 left, trimming Florida’s lead to 4-3. But Toews was whistled for hooking with 31.7 seconds remaining, helping the Panthers hold on.

“That push we had in the third, we can get more out of it,” Blackhawks coach Jeremy Colliton said. “We kind of ran out of gas.”

After a scoreless first period, Florida grabbed control with four in the second.

Dadonov stuffed home a backhand from in front before Vatrano beat Lehner from the right circle for a 2-0 lead at 6:14. Moments after the Panthers killed off a penalty, Vatrano slid a shot between Lehner’s legs for a 3-0 lead midway through the period.

Dach got one back for Chicago with a slick backhand on his 19th birthday, but Florida opened a 4-1 lead when Hoffman’s centering pass banked in off Vatrano’s left skate. Vatrano’s 14th goal completed his second career hat trick.

“It’s always nice to be rewarded like that,” Vatrano said. “To score one goal in this league is hard enough and obviously a hat trick is a great honor.”

NOTES: Kane reached 25 goals for the seventh consecutive season. ... Vatrano has five goals and four assists in his last five games. ... Florida’s six-game win streak is tied for the third-longest in franchise history. ... Hoffman extended his point streak to 10 games.

Panthers: At Montreal on Feb. 1.

Blackhawks: At Arizona on Feb. 1.