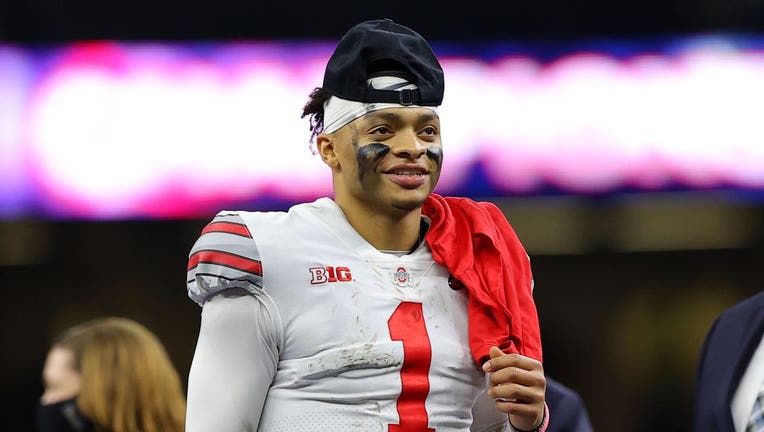 Justin Fields #1 of the Ohio State Buckeyes reacts after defeating the Clemson Tigers 49-28 during the College Football Playoff semifinal game at the Allstate Sugar Bowl at Mercedes-Benz Superdome on January 01, 2021 in New Orleans, Louisiana. (Photo

CHICAGO - The Chicago Bears inked a deal Thursday with their top draft pick Justin Fields for four years and $18 million with an $11 million signing bonus, according to an NFL Network report.

Fields, who was taken 11th overall, is the sixth Bears draft pick this year to sign his rookie contract.

He became the second quarterback drafted by general manager Ryan Pace since he was hired in 2015. The Bears traded up a spot in 2017 to take Mitchell Trubisky at No. 2 over Patrick Mahomes and Deshaun Watson. Trubisky is now backing up Josh Allen in Buffalo after the Bears decided to let him go as a free agent.

The Bears sent the No. 20 pick and a fifth-rounder this year along with a first-rounder and fourth-rounder next year to the Giants for Fields.