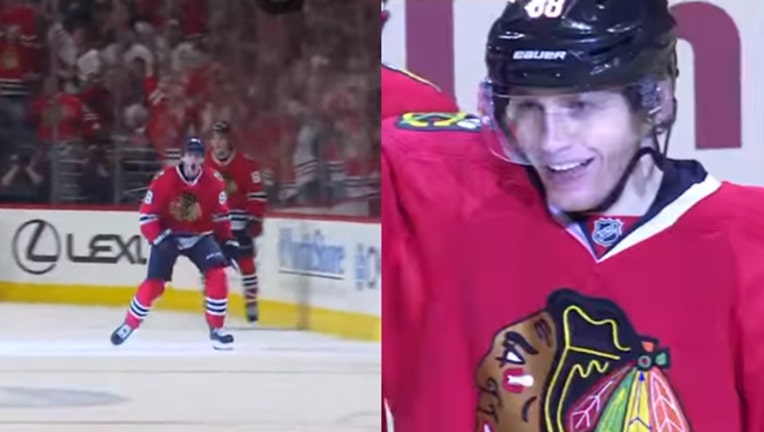 CHICAGO (AP) - Patrick Kane had three goals and an assist as the Chicago Blackhawks raced to a six-goal lead in the second period before hanging on for a 6-4 win over the Boston Bruins on Sunday.

Kane's scoring spree gave him 100 points for the first time in his nine-year career. The win was career No. 800 for Chicago coach Joel Quenneville.

Kane, the NHL's leading scorer, was clicking with linemates Artemi Panarin and Artem Anisimov early and often in the club's fourth win it its last five games. Panarin had a goal and three assists, while Anisimov added a goal and two assists.

Patrice Bergeron had two goals and an assist for the Bruins. He and David Pastrnak scored 11 seconds apart late in the second period. Bruins starting goalie Tuukka Rask was replaced early in the second after allowing a barrage of goals. Brad Marchand scored on a deflection midway through the third to cut it to 6-4, but Chicago hung on.

Jonathan Toews also scored for the Blackhawks, who won't finish lower than third in the Central Division and will avoid a wild-card playoff seeding.

Boston, with just two wins in its last nine games, remained one point behind Detroit and Philadelphia for the final Eastern Conference playoff spot. The Flyers played Pittsburgh later Sunday.

The Bruins have three games remaining, all at home, including one against Detroit on Thursday.

Chicago's Scott Darling made 42 saves in his ninth straight start as Corey Crawford remained sidelined with an upper-body injury. Before the game, Quenneville said he expects Crawford to be ready for the playoffs.

Rask allowed four goals on 22 shots before being replaced by Jonas Gustavsson two minutes into the second. Gustavsson permitted two goals on 12 shots.

Anisimov opened the scoring during a power play 13:14 in. Kane made it 2-0 with 1:29 left in the first on a breakaway. Kane made it 3-0 with a point-blank tap in of Anisimov's feed 54 seconds into the second.

Barely over a minute later, Toews finished a 2-on-1 break, converting Marian Hossa's pass to make it 4-0.

Panarin ripped in a one-timer from the slot at 5:17 to make it 5-0. Kane completed his hat trick with a power-play goal with 5:44 left in the second on a one-timer ripped from the right circle.

Pastrnak banked in a shot off the right post to complete a breakaway with 16 seconds left in the second to the get Boston on the board. Bergeron cut it to 6-2 just 11 seconds later on a deflection of Adam McQuaid's shot from just inside the right point.

NOTES: Kane's four points tied his career high. . Before Sunday's game, Crawford skated and took practice shots from goaltending coach Jimmy Waite for the second straight day. . Chicago C Andrew Shaw is out day-to-day with an upper-body injury sustained Friday at Winnipeg. . Boston F Jimmy Hayes, scoreless in 15 games, was a healthy scratch for the second straight game. ... Bruins F Kevan Miller (lower body) sat out after being injured in St. Louis on Friday. . Linesman Andy McElman worked his final and 1,500th game and was honored by the Blackhawks, Bruins and NHL before the contest.