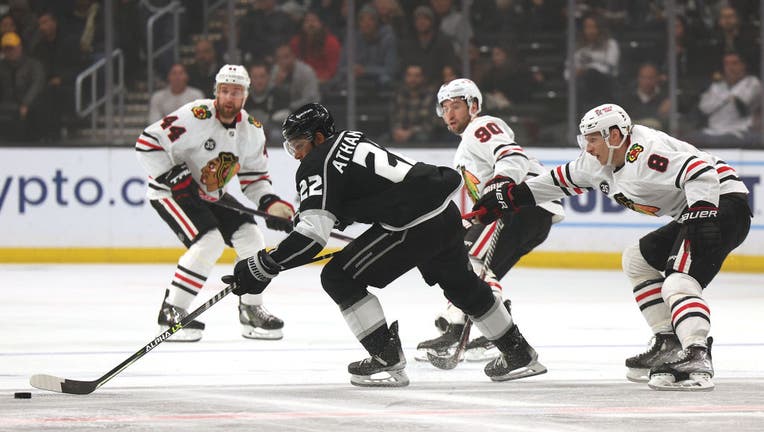 Andreas Athanasiou #22 of the Los Angeles Kings is hooked for a penalty by Dominik Kubalik #8 of the Chicago Blackhawks during the first period at Crypto.com Arena on April 21 in Los Angeles (Photo by Harry How/Getty Images)

LOS ANGELES - Phillip Danault scored for the fifth straight game and the Los Angeles Kings moved closer to wrapping up a playoff spot with a 4-1 victory over the Chicago Blackhawks on Thursday night.

Danault opened the scoring in the first period with his 26th goal of the season. He is the first Kings player since Marián Gáborík in 2014 to have a goal in five straight games.

The center also has a career-best seven-game point streak with five goals and eight points.

Anze Kopitar, Andreas Athanasiou and Trevor Moore also scored for Los Angeles, which has won four of its last five and had a 36-16 advantage in shots. The Kings are five points ahead of Vegas for third place in the Pacific Division. Los Angeles has three games remaining, while Vegas has four.

"I thought we had a little more aggressiveness in our game. Then we capitalized on the chances that we had," Kings coach Todd McLellan said. "The best thing that we have is control. We’re learning as we go, and that won’t change for nine periods. And then hopefully we get to play many more periods, and we’re gonna learn a lot more about ourselves."

Jonathan Quick made 15 saves, and Adrian Kempe and Alexander Edler each had two assists.

Patrick Kane scored for Chicago, which has lost nine of its last 11. It was the 430th career goal for Kane, moving him past Bill Guerin into sixth among U.S.-born skaters in NHL history.

Collin Delia made 31 saves before exiting in the third period due to a lower-body injury. Interim coach Derek King said after the game that Delia cramped up and couldn’t go the final eight minutes.

"We just couldn’t find the energy. We look tired physically and mentally. We were getting frustrated," King said. "They were a desperate hockey team. They needed the points and it showed."

Danault put the Kings ahead with a power-play goal at 11:58 of the first period when he put in a backhander off a deflected shot.

Kopitar scored his 19th goal of the season 9:16 into the second when he redirected Edler’s shot into the net.

Kane got the Blackhawks within 2-1 with a power-play score. Kane took Dylan Strome’s pass and beat Quick on his glove side for his 26th on the season.

Los Angeles challenged Kane’s goal because they thought that Chicago was offside. But the replay review showed no conclusive evidence that Alex DeBrincat entered the Los Angeles zone before Kane tagged up at the blue line.

"They jumped on us early. The shots were pretty heavily favoring them," Strome said. "We did a good job of staying in it. We kept it to 2-1 for awhile and had some chances, especially on the power play."

Los Angeles put it out of reach in the third on breakaway goals by Athanasiou and Moore 15 seconds apart. Athanasiou scored his 10th at 11:45 and Moore put in his 16th at 12:00.

"Obviously whenever you can cushion the lead like that in the third period, it’s huge, and we got two quick ones. Definitely gave us a little more confidence and just a little bit of safety room, for sure," Athanasiou said.

Quick has won four of his last five starts with a .918 save percentage and 1.92 goals-against average.

"This is his time of year, and he has elevated his game," McLellan said. "Players get into a zone, and I believe he’s found that zone. He’s played really well."

Viktor Arvidsson extended his assist streak to a career-long five games. It is the longest assist streak by an LA player since Kopitar had a six-game run in 2018.

Arvidsson has 27 assists on the season, including six in his last five games.

Blackhawks: Travel to the San Jose Sharks on Saturday night.