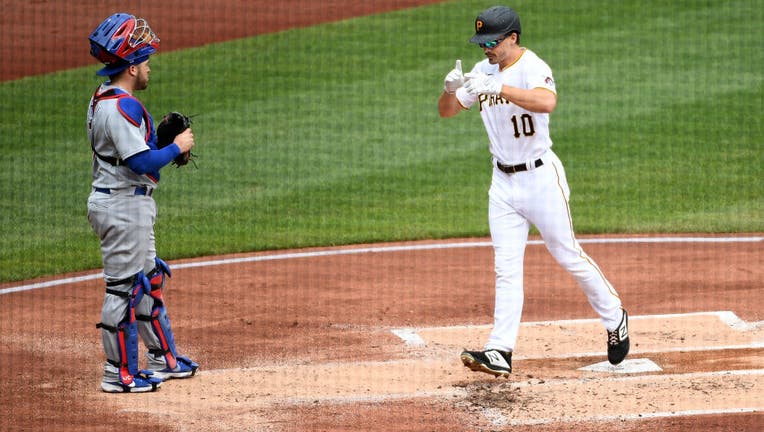 PITTSBURGH, PA - SEPTEMBER 24: Bryan Reynolds #10 of the Pittsburgh Pirates reacts as he crosses home plate after hitting a solo home run in the second inning during the game against the Chicago Cubs at PNC Park on September 24, 2020 in Pittsburgh, P

PITTSBURGH - Chad Kuhl pitched seven sharp innings and Colin Moran and Bryan Reynolds each homered in three-hit games in the Pittsburgh Pirates’ 7-0 victory over the slumping Chicago Cubs on Thursday.

Kuhl (2-3) retired the first nine batters and had a no-hitter until Anthony Rizzo doubled to the wall in right-center with one out in the sixth inning.

The right-hander finished his comeback season on a strong note. He allowed two hits, struck out five hits and gave up three walks. He sat out last season while rehabbing after Tommy John surgery.

“If felt great,” Kuhl said. “Obviously, you want to finish strong, and it just worked out. I think in just a short time this season I was able to make strides with everything, mound presence and stuff like that, that has not always been great.”

The Cubs, who clinched a postseason berth Tuesday, are stumbling toward the playoffs with five losses in six games. They have scored two or fewer runs in each of the five defeats.

Chicago’s magic number for clinching the NL Central remained two with three days left in the regular season. The Cubs’ only other hit was Jason Kipnis’ double in the seventh.

“I’d prefer to flush this one, to be honest with you. Throw it in the trash and start again tomorrow,” manager David Ross said. “It (stinks) right now that we’re not playing really well but we have to come back tomorrow with our lunch pail and go to work. Our guys have done a good job of that all year.”

Right fielder Jason Heyward said the Cubs are not feeling any angst over their late-season struggles. Chicago concludes its regular season this weekend with a three-game series at the crosstown White Sox, which begins Friday night.

“We’ve taken step one in what we want to have happen (reaching the postseason) but it’s not our end-all goal, obviously” Heyward said. “We just have to play out the rest of the schedule and move on to what’s next.”

Geoff Hartlieb and Blake Cederlind completed the shutout in which the Pirates’ staff was backed by four home runs.

Moran connected in the first inning to open the scoring and Reynolds homered in the second off Alec Mills (5-5). The Pirates got a third solo homer in the third inning from Adam Frazier to move in front 3-0 and Josh Bell hit a two-run blast in the fifth off Kyle Ryan that pushed the lead to 6-0.

Jared Oliva had the first two hits of his major league career for Pittsburgh with a pair of singles.

Three straight wins over the first-place Cubs provides some hope for next year to the Pirates (19-37), who have the worst record in the major leagues.

“We played another complete game, we did a lot of things well on all sides of the ball and it’s really encouraging to see,” manager Derek Shelton said. “Obviously, our record is not where we want to be, and to come in and play a team that’s leading our division and win three of four, I think it speaks a lot to this group.”

Mills lasted 3 2/3 innings and gave up four runs and eight hits with one walk and two strikeouts. He threw a no-hitter Sept. 13 at Milwaukee.

“I was not able to throw anything for a strike,” Mills said. “Probably the worst outing for me all season, I’d say. It’s really frustrating to end the regular season like that.”

C Jacob Stallings won the Roberto Clemente Award as the Pirates’ most valuable player in voting by the Pittsburgh chapter of the Baseball Writers Association of America. He won the Chuck Tanner Good Guy Award.

Cubs: CF Ian Happ did not play. Ross said he “tweaked” an ankle on Wednesday night while running the bases. … 3B Kris Bryant (lower right oblique stiffness) missed his third straight game and Ross did not have an update on his condition before the game.

Pirates: Start a three-game series against the Indians at Cleveland. Rookie RHP Mitch Keller (1-1, 3.24) will make his first start since being pulled with a no-hitter going through six innings Saturday against St. Louis. RHP Carlos Carrasco (3-4, 2.90) starts for the Indians.