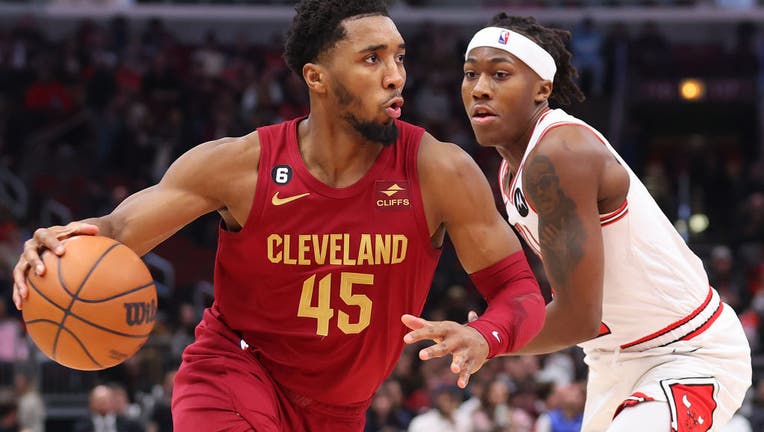 CHICAGO, ILLINOIS - DECEMBER 31: Donovan Mitchell #45 of the Cleveland Cavaliers drives to the basket against Ayo Dosunmu #12 of the Chicago Bulls during the second half at United Center on December 31, 2022 in Chicago, Illinois. NOTE TO USER: User e

CLEVELAND - Donovan Mitchell scored an NBA season-high and franchise-record 71 points — equaling the eighth-most in a game in history — as the Cleveland Cavaliers rallied from 21 down to beat the Chicago Bulls 145-134 in overtime on Monday night.

It was the highest-scoring game since Lakers legend Kobe Bryant had 81 points against Toronto on Jan. 22, 2006. Wilt Chamberlain owns the NBA record with 100 for Philadelphia against New York on March 2, 1962, at Hershey, Pennsylvania.

Mitchell scored 13 points in the extra session after forcing OT by grabbing his own intentionally missed free throw and making a circus-shot with 3 seconds left, tying the game at 130-all and breaking the Cavaliers record with 58 points.

In OT, Mitchell poured in 11 points to become the 12th player to score 70. He also had a career-high tying 11 assists and eight rebounds in 50 minutes, setting career highs with 20 free throws made and 25 free throws attempted.

The Central Division foes met for the second time in three days. Cleveland was the 103-102 winner at United Center on Dec. 31.

Mitchell entered the new year in an offensive funk, averaging 17.5 points over the previous four games while shooting 32.9% on 73 field goal attempts. He now ranks ninth in the NBA with a 28.0 scoring average. "A lot of teams are sending a lot more bodies at him, and that’s on us to help him," coach J.B. Bickerstaff said. "It’s on his teammates to recognize they have to make teams pay and make plays."

Bulls: G Javonte Green (right knee soreness) was unavailable after appearing in the previous three games. Green has missed nine total games with the injury and will undergo a thorough examination Tuesday in Chicago. "He was making some headway, then it flared up again," coach Billy Donovan said. … G Lonzo Ball (left knee surgery), who last played on Jan. 14, is lightly jogging and doing limited on-court work.