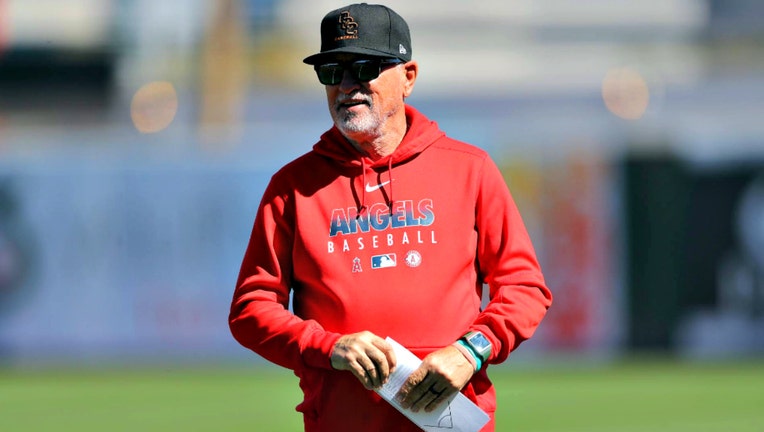 Manager Joe Maddon #70 of the Los Angeles Angels looks on prior to a game against the Cincinnati Reds on Tuesday, February 25, 2020 at Tempe Diablo Stadium in Tempe, Arizona. (Photo by Alex Trautwig/MLB Photos via Getty Images)

As if he'd never been away at all.

The manager who guided the Cubs to an elusive World Series championship in 2016 and parted ways with the team after last season returned on Monday, now guiding the Los Angeles Angels.

The mini-reunion came during at a spring training exhibition, with a split-squad of Cubs topping the Angels 9-4.

"It's very comfortable," Maddon said before the game. “You talk about wonderful memories, it was five years, but it was a very eventful five years. There's nothing to lament, it was wonderful. It was life-altering for me and my family to be part of this organization.”

The Angels and Cubs don't meet in the regular season, so the short trip from Tempe to Mesa provided Maddon a chance to meet old pals.

Maddon was embraced by new Cubs manager David Ross, who retired as a player after the Cubs beat Cleveland to end their 108-year World Series drought.

The Cubs averaged 94 wins per season during Maddon's tenure, and made the playoffs in the first four. Last year, after Maddon's contract was not extended following an early playoff exit, Chicago slumped to 84-78, missed the postseason and the Cubs front office moved on from Maddon.

Maddon ended up back with the organization where he spent most of his previous time in the game, including as a coach on the Angels' 2002 World Series winners.

"Stuff happens along the way," Maddon said. “Eventually it's for the best that you do something else. It's good for you and for them. There's nothing adversarial. I just texted Theo (Epstein, Cubs president) and we'll try to get together.”

“The method of the world today is everyone's looking for adversarial. It's not. We won together, it was a great moment,” he said.

Maddon teamed up with Bryant and Rizzo during the game, all three of them wired together on microphones to talk at the same time during the ESPN telecast.

“Last year we went off the rails a little bit. But we don't win 95-plus games without a real good method in place and really good players. I don't take it personally. I like change. It's got to be for all the right reasons,” Maddon said.

Maddon hasn't changed his unique methods in returning to the Angels' organization. Monday morning's guest speaker in Tempe was basketball Hall of Famer Charles Barkley, who addressed the team and hit a few golf shots in the outfield.

"He's great," Maddon said of the NBA great who lives in the Phoenix area. “It's energy and enthusiasm. If you can do something that adds to that, I'll take it. I think that's overlooked."

"Players love that stuff. We're going through the tedious, grinding schedule of spring training and anything you do to lighten up the day I think is good. I think you can feel it in the clubhouse."

Barkley, a Phillies fan from his days with the Philadelphia 76ers, has admired New Jersey native Mike Trout for a while, and was glad to get the chance to talk to the Angels star on Monday.

“I've only met him one time. I just happened to run into him on an elevator, and I was so excited to meet him, I was like, I didn't want to bother him. It was just quick,” Barkley said.

"It was in LA, I told him it was an honor to meet him. Obviously being from Philadelphia, we knew a lot about him. I'm a fan, but I just said hello to him kind of quickly. I was kind of 'fanboying' on him a little bit."

One thing Maddon will miss about leaving the National League is the style of play — and certainly don't count him among the supporters of the universal designated hitter.

“The National League game is a better game. I know we'll probably go to the DH. I think it's awful. I don't understand where it adds interest to the game, I think it subtracts from it,” he said.

“Don't keep talking about offense, that's boring. There's other ways to score points. There's more to think about," he said. "If you want to teach young kids, teach them the National League game — it makes you think. I think it (the DH) should be dropped right now. You can make all the arguments you want.”