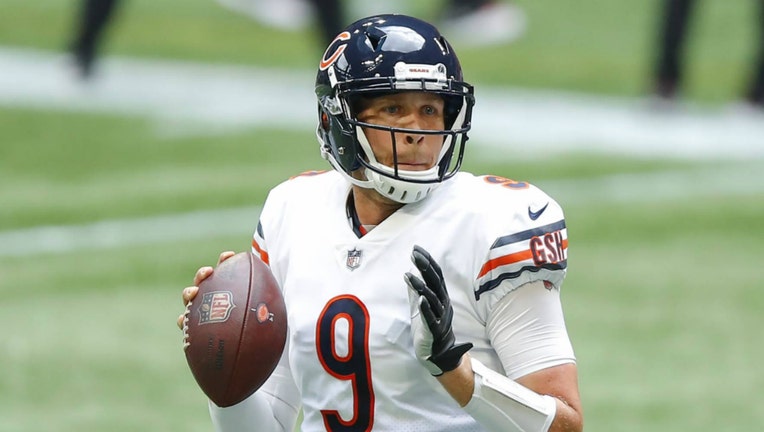 Nick Foles #9 of the Chicago Bears passes during the second half of an NFL game against the Atlanta Falcons at Mercedes-Benz Stadium on September 27, 2020 in Atlanta, Georgia. (Photo by Todd Kirkland/Getty Images)

CHICAGO - The Chicago Bears traded for Nick Foles in the offseason to push Mitchell Trubisky for their starting quarterback job.

The Super Bowl 52 MVP knocked him out of the No. 1 spot. Now, he has another chance to show he’s more than just a reliable backup.

After coming in to lead a big comeback last week, Foles will make his first start for the unbeaten Bears when they host the Indianapolis Colts on Sunday.

“We have a great locker room here,” he said. “We’ve had a crazy start to the season, but I’ve been around several locker rooms and this is a really special locker room.”

Acquired from Jacksonville in the offseason, Foles took over in the third quarter at Atlanta last week and threw three touchdowns in the fourth as Chicago wiped out a 16-point deficit to win 30-26.

He and the Bears (3-0) will be challenged by the NFL’s No. 1 defense. The Colts (2-1) have won back-to-back games after beating Minnesota and the New York Jets.

Here are some things to know about the matchup:

The Bears matched their best start since 2013. They have a chance to go 4-0 for the first time since the 2006 Super Bowl team won its first seven.

As good as that sounds, they had to rally from 17 down in the fourth quarter to win the opener at Detroit. And they looked as if they were on their way to a loss at Atlanta before launching a big comeback. In between, they nearly blew a 17-point lead at home against the New York Giants.

On the plus side for the Bears, they are the first team with two wins in the same season after trailing by 16 or more in the fourth quarter, according to the Elias Sports Bureau. Then again, their opponents are a combined 1-8.

The Colts entered Week 4 with the league’s top overall defense and ranked among the top five against the run, against the pass, in sacks and in interceptions.

Cornerback Xavier Rhodes was the AFC’s defensive player of the week after picking off two passes, returning one for a touchdown in last week’s win over the New York Jets.

Cornerback T.J. Carrie also scored on an interception return against the Jets, marking the first time in nearly 50 years the Colts had two pick-6s in the same game.

Not enough? Indy also had a safety in each of its past two games, the first time that’s happened since late in the 1960 season. The Colts have never had a safety in three successive games.

“If you’re able to do that, then you’re able to — with the coverages, you’re able to have the quarterback hold the ball a little bit, for an extra tick. That’s really when you have good rushers on the edge and inside, that’s what you’re searching for.”

Coach Frank Reich goes into this week with a thin receiving group.

Parris Campbell, who was expected to play a key role in his second NFL season, had surgery on his injured left knee Wednesday and isn’t expected to play. Rookie Michael Pittman Jr., Indy’s top draft pick, had surgery to relieve pressure from an injury in his right calf and probably won’t be available, either.

Without Campbell or Pittman, expect four-time Pro Bowler T.Y. Hilton, Zach Pascal and Daurice Fountain to catch more passes. Rookie Dezmon Patmon, a sixth-round draft pick, could make his NFL debut after being inactive the past three weeks and the Colts have three receivers — DeMichael Harris, Krishawn Hogan and Marcus Johnson on the practice squad.

Indy did get Pro Bowl tight end Jack Doyle back last week, though Philip Rivers didn’t throw any passes to Doyle, and tight end Trey Burton returned to practice this week after spending the first three weeks on injured reserve.

Though the two teams haven’t met since October 2016, when the Colts beat the Bears in Indianapolis, they know each other well.

Nagy was an assistant coach in Kansas City when Ballard was in the Chiefs’ front office, and he said their oldest sons became best friends. Nagy added his wife also taught at the high school Reich attended, and Nagy coached there.

Reich was the Eagles’ offensive coordinator when Foles helped them win the Super Bowl. And Burton spent the past two seasons in Chicago.

The Bears got little from their tight ends last season. That’s changing with Jimmy Graham.

The five-time Pro Bowl pick already has three touchdown catches equaling his total for all of last season with Green Bay. He caught two scores last week, the first time he had more than one in a game since 2017 with Seattle.