CHAMPAIGN, Ill. - Freshman Malaki Branham scored 31 points to lift No. 22 Ohio State to an 86-83 win over No. 15 Illinois on Thursday night.

The result dealt a serious blow to Illinois’ Big Ten title hopes, dropping them a full game behind leaders Purdue and Wisconsin two weeks left in the regular season.

The Illini (19-8, 12-5 Big Ten) mounted a furious 10-0 run to cut their deficit to two points with 1:49 left in the game on Jacob Grandison’s layup, and Trent Frazier buried a 3 with 14.6 seconds left to pull Illinois within one point.

After Ohio State’s Kyle Young split two shots at the line, Frazier drove to the basket, but turned the ball over when he misplaced a pass out to Grandison at the 3-point line with four seconds left.

With the win, the Buckeyes (18-7, 11-5 Big Ten) are in fourth place in the conference — a game-and-a-half behind Purdue and Wisconsin and one behind Illinois. 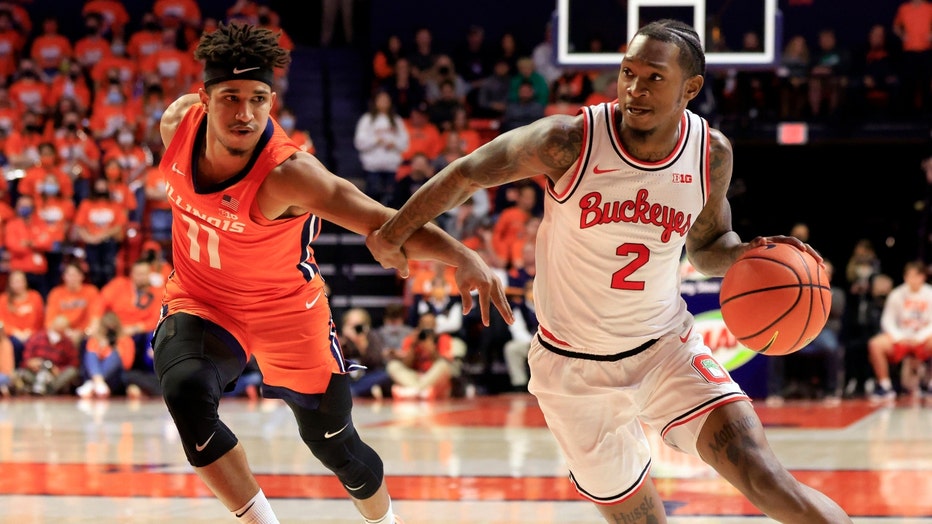 Cedric Russell #2 of the Ohio State Buckeyes drives to the basket against Alfonso Plummer #11 of the Illinois Fighting Illini during the second half at State Farm Center on February 24, 2022 in Champaign, Illinois. (Justin Casterline/Getty Images / Getty Images)

"It’s hard to attack them inside because of Kofi (Cockburn’s) size," Ohio State coach Chris Holtmann said. "They have good length across the board. Our greatest guy off of ball screens that is the greatest threat is Malaki. I think our change there at halftime was to kind of ride that and see what came of it."

Illinois guard Alfonso Plummer hit his first four attempts from 3-point range, helping Illinois jump out to a 21-8 lead in the opening 10 minutes. Plummer finished with 26 points, while Grandison had 14 and Frazier and Cockburn, who fouled out in the second half, each had 12.

Ohio State forward E.J. Liddell was questionable with the flu before the game, but made the start and finished with 21 points and six rebounds. Young had 18 points and a team-high seven rebounds.

The Buckeyes started the game 3 of 13 from the field, but closed the half by making 9 of their final 14 attempts. Ohio State finished the half on a 28-16 run, trailing 37-36 at the break. Liddell knocked down a jumper on the Buckeyes’ opening possession of the second half to edge them ahead, 38-37, for the first time of the night.

"(Branham has) been having a great stretch," Liddell said. "Him just having confidence like that, his ability, it comes from hours of work in the gym. People don’t see the hours. For him to step up like that is huge, and we’ll need that more at the end of the season."

Illinois coach Brad Underwood was ejected with 6:17 to play after picking up his second technical foul. He pumped the home crowd into a frenzy before leaving the court at the insistence of his staff.

"The first (technical) one, I tried really hard to get," Underwood said. "Second one, I didn’t even deserve it. If you’re going to throw me out, come on, just let me earn it. I didn’t like some of the calls and I deserved the first one."

It was his first ejection in five seasons at Illinois.

Unfazed by the sold-out crowd and Illinois’ comeback, Branham scored more than 20 points for the third game in a row. He handled the ball with confidence, never turning it over, and finished the game 10 of 11 at the free-throw line.

"That (trust) means everything," Branham said. "They trust me with the ball in my hands, my teammates and coaches, so just making the right play."

Branham’s 21 second-half points helped the Buckeyes build a commanding lead after trailing the entire first half. He went on a 6-0 solo run, making a pair of layups and two free throws to give Ohio State a 16-point lead with 5:58 to play.

Ohio State: Branham is the emerging star, but Young looks to be stepping up as the Buckeyes’ third scorer behind him and Liddell. Young’s efficiency helped Ohio State hang around despite a sluggish start, and his attentiveness on the glass can help limit second chances for opponents.

Illinois: On a night when Cockburn struggled mightily, Plummer’s precision was crucial. But the Buckeyes limited him to three shots in the second half. He’ll have to find a way to keep getting open for the Illini to reach their potential.

Ohio State: At Maryland on Sunday.

Illinois: At Michigan on Sunday.