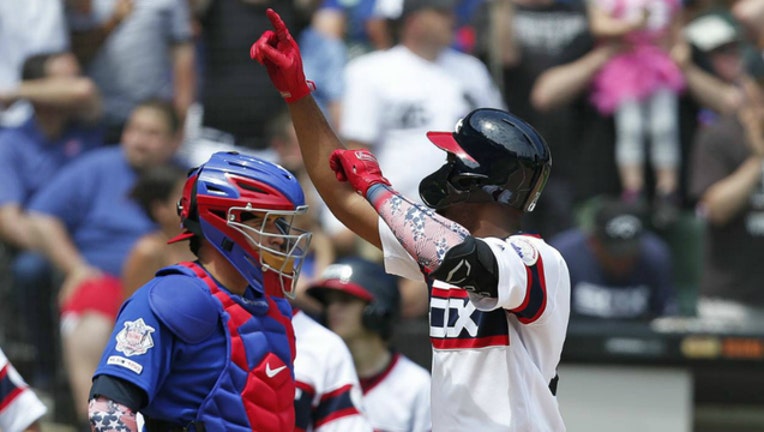 CHICAGO - Iván Nova insisted he had one thought on his mind, and it wasn't his winless streak at his home park.

Nova pitched shutout ball into the sixth inning for his first win in eight tries at Guaranteed Rate Field, Eloy Jiménez and José Abreu homered, and the Chicago White Sox beat the crosstown Cubs 3-1 to salvage a two-game split Sunday.

"I was thinking about doing my job today," Nova said. "A lot of times, wins don't depend on me. I can do a good job out there and we've still got to score runs and the bullpen has to hold up."

The right-hander delivered in a big way after going 0-4 with an 8.31 ERA in his first seven starts there. Nova (4-7) allowed five hits over 5 2/3 innings, struck out four and walked one.

As for snapping his home losing streak? Nova wasn't too concerned about that.

"What do I have to feel pressure for to win games?" he said. "The win depends on everybody. You can do a good job and not get the win. But it's good to win."

Jiménez hit a long, two-run homer to center against Kyle Hendricks in the fourth.

Abreu had three hits, including a solo shot to the right-field bullpen against Brad Brach in the fifth that made it 3-0.

Yoán Moncada extended his career-high hitting streak to 13 games with a single. Alex Colomé worked the ninth for his 20th save in 21 chances, getting Victor Caratini to ground into a game-ending double play after Jason Heyward singled, and the White Sox won for the sixth time in nine games. At 42-44, they have their best record at the All-Star break since the 2016 team was 45-43.

"Keep pushing," catching James McCann said. "Keep fighting. People have counted us out from Day 1, and here we sit, kind of opened a few eyes. And it's time to open a few more eyes as the season goes on."

After winning two in a row, the Cubs lost for the 16th time in 26 games. They went 0 for 8 with men in scoring position and fell to 0-10 when scoring one run or less. Even so, they maintained a half-game lead in the NL Central.

"I'll take it in that regard," manager Joe Maddon said. "Our maladies were exemplified, personified by the offense. We were unable to capture that offensive way. Somehow we've got to figure that component out."

Hendricks (7-7) lost his third straight start after going 6-0 in his previous eight to match the longest winning streak of his career. The right-hander gave up two runs and four hits in four innings and threw 86 pitches in his second outing after missing about two weeks because of inflammation in his right shoulder.

Robel Garcia homered for the second time in four games since the Cubs called him up from Triple-A Iowa. But it was a frustrating afternoon for the North Siders.

"We're just as greedy as any fan out there," Kris Bryant said. "We want to be 10 games ahead. There's a lot more breathing room, but it just hasn't gone that way for us this year. First place is great, but we've missed a lot of opportunities to separate ourselves. That's the frustrating part. We just have to play better. I know we can do it."

The White Sox optioned struggling outfielder Daniel Palka to Triple-A Charlotte. The 27-year-old Palka is 1 for 45 in 17 games over two stints with the White Sox after hitting 27 homers as a rookie last season.

Cubs: RHP Carl Edwards Jr. (left thoracic strain) will remain on rehab at Triple-A Iowa after the All-Star break rather than rejoin the Cubs. Edwards has been sidelined since June 9. ... RHP Allen Webster (inflamed nerve in pitching arm) had his rehab moved from Class A to Double-A Tennessee.

Cubs: RHP Yu Darvish (2-4, 5.01 ERA) gets the first start following the All-Star break when the Cubs open a three-game series against Pittsburgh on Friday. Darvish has 11 no-decisions in 12 starts since beating Arizona on April 27 for his most recent victory. RHP Chris Archer (3-6, 5.49) pitches for Pittsburgh.

White Sox: The White Sox and Athletics have not announced who will start when the teams open a three-game series at Oakland on Friday.