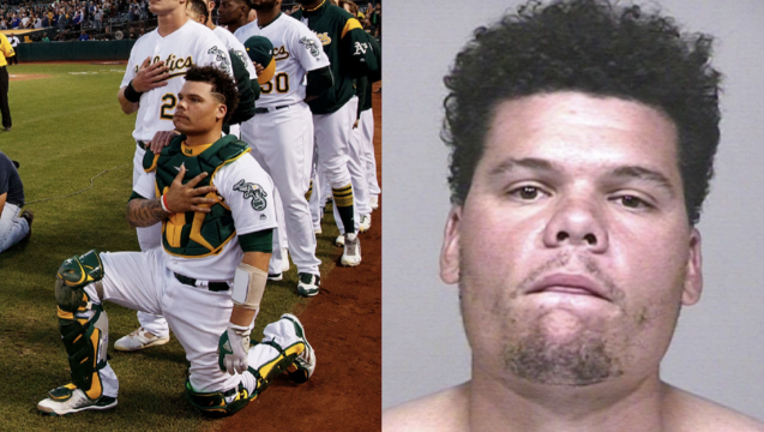 Bruce Maxwell of the Oakland Athletics kneels during the national anthem before the game against the Seattle Mariners at the Oakland Coliseum on September 25, 2017 in Oakland, California. (Jason O. Watson/Getty Images)

(FoxNews.com) - Bruce Maxwell, the only Major League Baseball player to kneel during the national anthem this season, has been arrested on a gun charge.

Scottsdale police said officers went to Maxwell's home Saturday night after getting a call about a person with a gun. Maxwell was booked on charges of aggravated assault with a deadly weapon and disorderly conduct.

Maxwell, 26, hit .237 with three home runs and 22 RBIs in 76 games this season. He was projected to be Oakland's starting catcher next year.

Last week, Maxwell claimed during a visit to his hometown of Huntsville, Ala., that he was refused service at a restaurant because of his protest. But a waiter told Fox News that Maxwell was “outright lying,” about what happened.

“I didn’t even know who Bruce Maxwell was,” waiter Matt Henry said.

Fox News' Hollie McKay and the Associated Press contributed to this story.