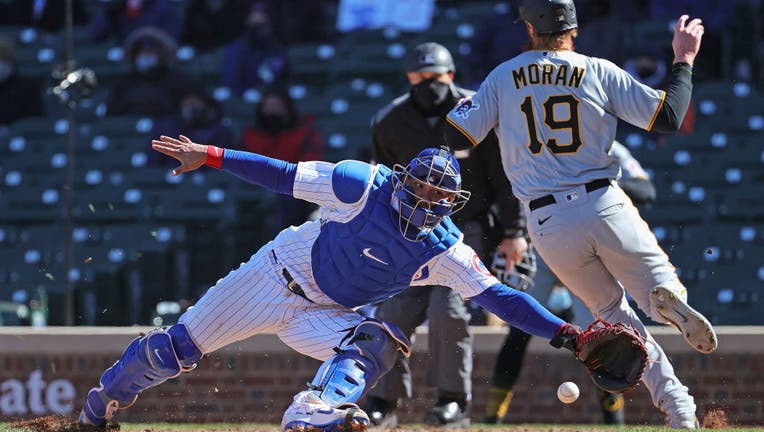 CHICAGO, ILLINOIS - APRIL 01: Willson Contreras #40 of the Chicago Cubs dives for a relay throw as Colin Moran #19 of the Pittsburgh Pirates runs past to score a run in the 45th inning during the Opening Day home game at Wrigley Field on April 01, 20

The gametime temperature at Wrigley Field was 36 degrees, and the flags at the iconic ballpark rippled in the breeze for much of the sunny afternoon. A crowd of 10,343 dressed in winter jackets, hooded sweatshirts and hats for the return of fans to Wrigley after they were kept out last summer because of the pandemic.

Pittsburgh went 3 for 20 with runners in scoring position and left 15 runners on base. But it handled the cool conditions just a little bit better than Chicago, led by its largely anonymous bullpen.

"They did a nice job," Pittsburgh manager Derek Shelton said. "They kind of all just fed off each other."

Anthony Rizzo, Joc Pederson and Willson Contreras each hit a sacrifice fly for Chicago, but that was it for the reigning NL Central champions. Rizzo doubled in the first against Chad Kuhl and Eric Sogard added another double in the eighth for the team’s only hits.

Pederson walked with one out in the ninth and advanced to second on a wild pitch, but Rodríguez struck out Javier Báez and Jason Heyward to end the game.

It was an ugly opener for a Cubs team looking for a fast start to a season shadowed by uncertainty. Rizzo, Báez and Kris Bryant — three key sluggers from the franchise’s historic 2016 World Series championship — are eligible for free agency after this year.

"I was just in a bad position and fighting it," Hendricks said. "We’re out there moving, so I was warm, but I really made it tough on the position players by just long innings, long counts, a lot of three-ball counts, a lot of walks. So they were standing out there getting cold. It was just bad all around. Set a bad tone. Just can’t let that happen again."

Hendricks (0-1) wasn’t the only one with control problems. The Cubs finished with 11 walks and hit a batter during the 4-hour game.

"I think that’s the tough thing to watch — 12 free passes with the hit batter," Cubs manager David Ross said. "Especially (on) a cold day at Wrigley Field, the walks are gonna hurt you."

Hayes, one of the preseason favorites for NL Rookie of the Year, got Pittsburgh off to a fast start. After Adam Frazier reached on a leadoff walk in the first, the son of former big league infielder Charlie Hayes hit a long drive to left-center for his sixth career homer.

"I couldn’t have squared it up any better," Hayes said. "I was a little out front, but I squared it up pretty good so I knew that it was going to go out."

Frazier added an RBI single in the second and a run-scoring double in the seventh, giving Pittsburgh a 5-2 lead.

Pirates right-hander Kyle Crick is away from the team for the birth of his child. Crick had a 1.59 ERA in seven relief appearances last year.

Pirates: RHP Cody Ponce was placed on the 10-day injured list because of a right forearm injury. ... LHP Steven Brault opened the season on the 60-day IL because of discomfort in his throwing shoulder. He was shut down during spring training.

Jake Arrieta begins his second stint in Chicago when the series resumes on Saturday, and Tyler Anderson gets the ball for Pittsburgh. Arrieta played for Chicago for five years, winning a Cy Young Award and the World Series, before signing with Philadelphia in March 2018. The right-hander returned to the Cubs in February for a $6 million, one-year contract. Anderson is making his Pirates debut after the lefty signed with the team in free agency.