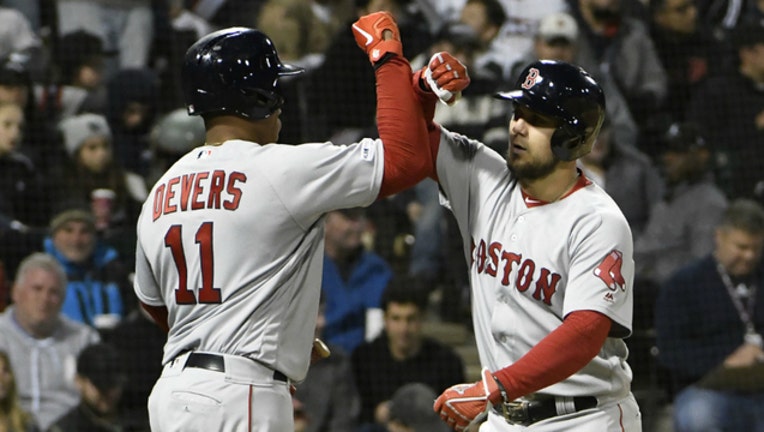 CHICAGO (AP) - The Boston Red Sox started slowly at the plate, but were nearly unstoppable once they started connecting.

Boston strung together 10 straight hits against Manny Bañuelos, ending one hit shy of the major league record during a nine-run third inning in a 15-2 rout of the Chicago White Sox on Saturday night.

Carson Fulmer replaced the left-hander and interrupted the hit parade by walking Andrew Benintendi. Betts flew out to right to end the inning after 14 batters.

"We were one pitch away from not scoring in the inning," Boston manager Alex Cora said. "We know we're good offensively. It just a matter of getting that big hit.

"It wasn't luck. They were barreling balls the whole inning and it was good."

The Colorado Rockies had a major league-record 11 straight hits during a 17-2 win over the Chicago Cubs at Coors Field on July 30, 2010.

There were no bloops in Boston's run. All 10 hits were well-struck and most were line shots.

"After the first time around, I think guys had a better feel of (Bañuelos') stuff and knew what to expect and put some good swings on it," Benintendi said.

Bañuelos just lost it after not getting Vázquez to close out the third.

"I was commanding the ball real well," Bañuelos said. "The third inning, the first two outs were great, but I didn't get the chance to get the third out. Just one of those days where things turn over like that quick."

Chavis added another solo shot in the fifth for his first multihomer game and finished with four hits and three RBIs. Vázquez also had four hits and Benintendi had three as the Red Sox rolled to their fifth win in their last six games.

"I don't think I've ever, ever had an inning like that in pro ball," said Chavis, a rookie who was called up from Triple-A Pawtucket on April 20. "You see everybody getting hits and everybody's like, 'Let me hop on and let me get a little bit of that.'"

All of the Red Sox starters except Vázquez had at least one RBI.

Abreu added a solo shot off Tyler Thornburg in the eighth. In his last 13 games, the White Sox slugger his batting .426 with four homers and 22 RBIs.

The Red Sox added five more runs in the fourth off Fulmer, on three hits, two walks and two errors. Benintendi capped that rally with an RBI double.

RHP Fulmer, along with RHP José Ruiz, were optioned to Triple-A Charlotte after the game. In eight games with the White Sox, Fulmer was 1-1 with a 6.97 ERA

The Red Sox have scored 47 runs in Rodriguez's past five starts and won them all.

A male fan in his 20s hopped into the outfield in the top of the fifth. He ran toward the infield from center field smiling with his arms extended before being tackled by four security guards.

The Red Sox claimed 1B Joey Curletta off waivers from Seattle on Saturday and assigned him to Double-A Portland.

Red Sox: INF Núñez returned after a rehab assignment (mid-back sprain) with Triple-A Pawtucket and started at second base. ... INF Tzu-Wei Lin was placed on the 10-day IL with a left knee sprain. Lin got hurt when he hooked his left foot awkwardly on second base Friday as he was caught stealing. ... 2B Dustin Pedroia (left knee irritation) went 3 for 4 on Saturday with Double-A Portland as he continued his rehab assignment.

White Sox: Renteria had no update on LHP Carlos Rodón (left elbow inflammation), who was placed on 10-day IL on Thursday.

UP NEXT: Boston RHP Rick Porcello (2-3, 5.52) will face Chicago RHP Dylan Covey (0-1, 6.75) in the finale of the four-game series. Porcello has won his last two starts, allowing three runs and striking out 13 over 14 innings. Covey will make his first start since being recalled from Triple-A Charlotte on April 29.