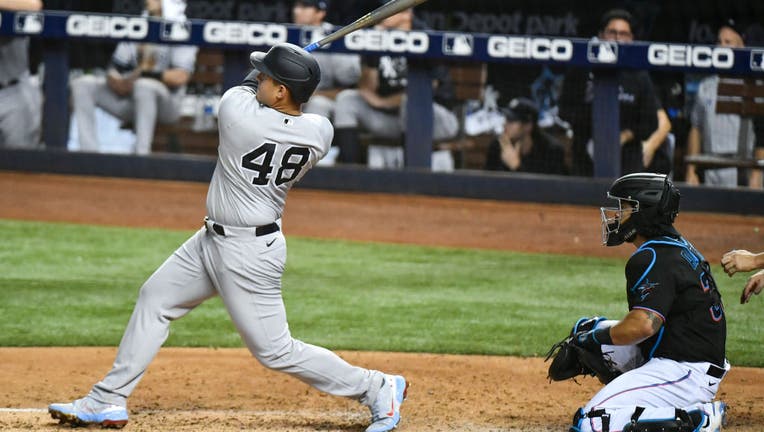 MIAMI, FL - JULY 30: Anthony Rizzo #48 of the New York Yankees hits a home run in the sixth inning against the Miami Marlins at loanDepot park on July 30, 2021 in Miami, Florida. (Photo by Eric Espada/Getty Images)

MIAMI - With a pair of new sluggers in place, the New York Yankees are ready to make their playoff drive.

First baseman Anthony Rizzo homered in his Yankees debut Friday night and All-Star outfielder Joey Gallo also suited up with New York for the first time in the opener of a three-game series against the Miami Marlins.

New York obtained Gallo and left-handed reliever Joely Rodríguez from the Texas Rangers for four minor league prospects Thursday. Rizzo’s nine-year tenure with the Chicago Cubs ended after he was sent to the Yankees for two prospects.

Entering the weekend series at Miami, the Yankees were 8 1/2 games behind AL East leader Boston and 3 1/2 behind Oakland for the league’s second wild card.

"I’ve been hearing for some time that it was a possibility, that New York was in play for me," Gallo said. "I grew up a huge Yankee fan. My family is from New York. It was pretty surreal they told me I was going to the Yankees. A great opportunity — it’s an amazing team to be a part of. I’m excited."

The addition of Gallo and Rizzo to a lineup that already features Aaron Judge, Giancarlo Stanton, DJ LeMahieu and Gary Sánchez provides the Yankees left-handed power the club has lacked this season.

"Lot of heavy hitters," Rizzo said. "Lot of big boys with a lot of clout and walking into a new clubhouse for the first time in a long time is a good feeling. You come in here and you can’t help but be excited and can’t wait to get out there and play."

The 27-year-old Gallo hit 145 homers in seven seasons with the Rangers and was tied for sixth in the majors with 25 this year. He also is praised for his work in right field.

"That’s completely fine with me," Gallo said. "I’m cool with that."

For the 31-year-old Rizzo, who had 243 homers in 11 major league seasons, joining the Yankees came with the difficult emotions of leaving the Cubs. Rizzo was a centerpiece that helped the Cubs end their 108-year World Series championship drought in 2016. Longtime teammates Kris Bryant and Javier Báez also were moved at the trade deadline Friday.

"It’s crazy. It’s been a lot of talk for years and for it to finally happen, you can’t script it," Rizzo said. "We had good memories and friendships that are going to last forever.

"Did a lot of special things in front of a fan base that did not see a World Series in 108 years. Those moments will never be taken away."

With his trade to the Yankees, Gallo also will have a new look. Gone is the beard Gallo has sported for 10 years, in compliance with New York’s facial hair policy.

"I literally had just gotten a haircut (the day of the trade), the beard trim, everything," Gallo said. "And three hours later, you’re traded and you’re going to New York. Ah man, I guess I have to shave. So I went home and had to do it on my own. That’s one of the rules to play in New York. I don’t mind doing it. I haven’t seen my face in about 10 years."

Gallo will wear his customary uniform No. 13 with the Yankees, previously worn by Alex Rodríguez. Rizzo, who wore No. 44 with the Cubs, had no choice but to switch because the club has retired the number in honor of Reggie Jackson. Rizzo will wear No. 48.

"Kind of slim pickings around here, for the right reasons," Rizzo said.

An eight-year major league veteran, Heaney was 6-7 with a 5.27 ERA in 18 starts for the Angels this season.