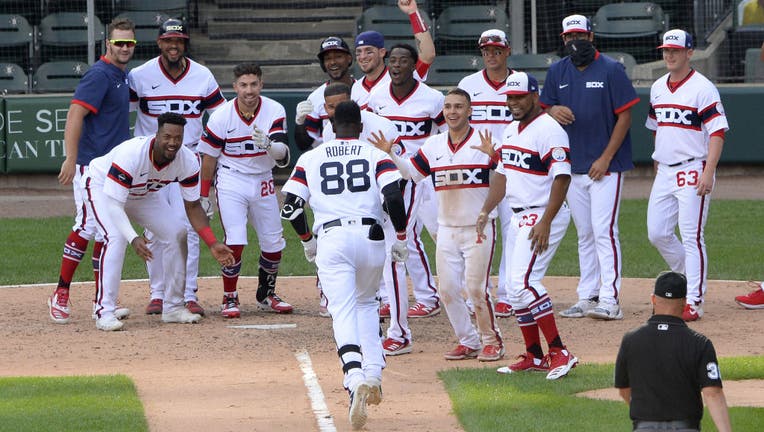 CHICAGO - AUGUST 30: Luis Robert #88 of the Chicago White Sox approaches home plate as his teammates excitedly await after Robert hit a walk-off, three run game winning home run off of Tyler Zuber #53 of the Kansas City Royals in the tenth inning on

CHICAGO - As soon as bat met ball, Luis Robert knew. The prized rookie watched as his first game-ending home run sailed over the wall and the White Sox once again grabbed a share of the AL Central lead.

Robert belted a three-run drive in the 10th inning that gave the Chicago White Sox a 5-2 victory over the Kansas City Royals on Sunday.

Dane Dunning threw five no-hit innings before being pulled from his second major league start, and the surging White Sox won for the 11th time in 13 games to move into a first-place tie with Cleveland in the AL Central.

Kansas City reliever Tyler Zuber (1-2) intentionally walked José Abreu to start the 10th, putting runners on first and second before James McCann struck out. Robert drove the next pitch a few feet beyond the left-field wall after being retired on two long fly balls earlier in the game. The home run was the Cuban slugger’s ninth, tops among big league rookies.

“I am super happy,” Robert said through a translator. “Very excited about this moment. ... It’s very special. But I still know that I have a lot of room to improve and to keep learning this game. I’m just going to keep working hard and doing whatever it takes to get better.”

Five days after Chicago ace Lucas Giolito tossed the first no-hitter of this pandemic-shortened season, Dunning put on quite a performance of his own.

The 25-year-old right-hander struck out seven and allowed just one runner, when he walked Maikel Franco on a 3-2 count with one out in the third. Dunning threw 79 pitches, 45 for strikes, after being recalled from Chicago’s alternate training site.

The White Sox were rolling along with a 2-0 lead in the sixth when Cam Gallagher broke up the no-hit bid with a one-out double against Jimmy Cordero. Whit Merrifield drove in Gallagher with a single and tied it in the eighth with a solo homer against Steve Cishek.

Chicago’s James McCann walked and scored in the second and smacked an RBI double in the third. Nick Madrigal had three singles and an RBI.

Abreu extended his hitting streak to 13 games, and the White Sox bounced back from a loss to take two of three from the AL Central’s last-place team.

Alex Colome worked around two singles and a walk in the ninth, retiring Adalberto Mondesi on a liner to first with two on to escape the jam. The Royals also had runners on first and second with two outs in the 10th after Jace Fry walked Nicky Lopez and Merrifield. Matt Foster (3-0) struck out Hunter Dozier to end the threat.

The Royals wasted a solid start by rookie Kris Bubic and lost for the sixth time in eight games.

Bubic gave up two runs and six hits in 5 1/3 innings. The 23-year-old lefty struck out eight and walked two.

“Obviously we feel like we’re a better team than last year,” Merrifield said. “We’ve got to do a better job of finding ways to win. Hopefully this will be a leaning experience and next time we’re in a situation like this, we can figure out a way to come across with a win.”

The Royals called up hard-throwing prospect Carlos Hernandez from their alternate site to boost their short-handed bullpen. The 23-year-old right-hander had never pitched above Class A. But with reliever Ian Kennedy (calf) hurt and Trevor Rosenthal traded to San Diego on Saturday, Kansas City needed help.

Royals: Manager Mike Matheny said C Salvador Perez continues to experience the discoloration in his vision that landed him on the injured list Aug. 21. ... Matheny had no update on Kennedy, saying trainers were “still taking a look at everything” and “seeing how it looks this morning.” Kennedy was hurt fielding a grounder on Saturday, and Matheny said after that game a trip to the injured list was a possibility.

White Sox: 3B Yoán Moncada was held out of the lineup after he irritated the back of his left leg running the bases in the ninth on Saturday. ... LHP Gio González (strained right groin) was placed on the 10-day injured list.