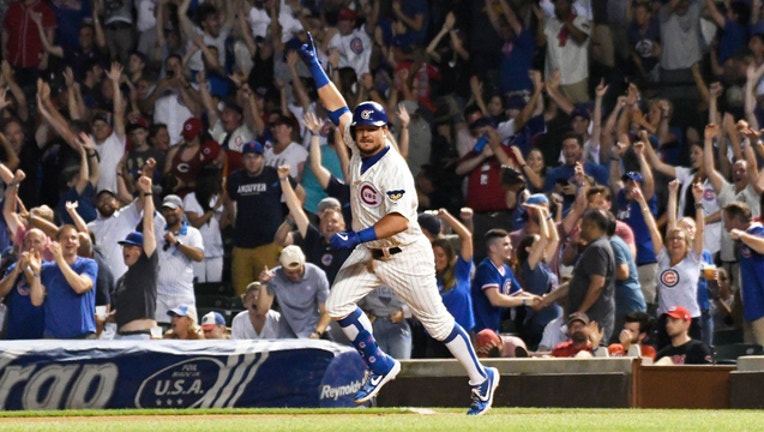 Kyle Schwarber #12 of the Chicago Cubs celebrates his walk off home run against the Cincinnati Reds during the tenth inning at Wrigley Field on July 16, 2019 in Chicago, Illinois. (Photo by David Banks/Getty Images)

CHICAGO (AP) - Kyle Schwarber wasn't thinking home run when he stepped to the plate in the bottom of the 10th inning Tuesday night.

That, he believes, was the key to success.

Schwarber hit a solo home run with one out to give the Chicago Cubs a 4-3 comeback victory over the Cincinnati Reds.

The lefty slugger stroked a 1-1 pitch from closer Raisel Iglesias (2-8) into the basket in front of the left field bleachers for his 21st homer and first career game-ending hit of any kind.

"I was actually trying to hit a single up the middle," Schwarber said. "I didn't want to get too big. I stayed up the middle, just got under it and hit it well enough for it to catch the basket."

Robel Garcia and Kris Bryant also connected for the NL Central leaders, who have won six of eight.

Eugenio Suárez homered for Cincinnati, which fell to 7-4 against Chicago this season.

Iglesias was pitching for the third straight day. He got five outs for a save Monday night and then the final two outs of the ninth inning Tuesday before staying in for the 10th.

"To come back tonight, he had one (bad) pitch," Reds manager David Bell said. "It's too bad because it shouldn't take away from what he did and his performance tonight.

"His arm feels great. Knowing that it might cost us the next day or two, we went for it right there."

Cubs spot starter Alec Mills allowed three runs and five hits over six innings in his season debut. He walked one, struck out two and hit four batters with pitches.

Cincinnati's Derek Dietrich was hit by a pitch twice to extend his major league-leading total to 20.

Suárez opened the scoring with a solo homer in the first on a 3-2 pitch with two outs for a second straight night.

Cincinnati, though, wasn't through. Yasiel Puig and Dietrich were hit by pitches, and Nick Senzel followed with an RBI single. José Peraza then hit a drive into left-center for a double. Dietrich scored easily to make it 3-0, but Senzel was cut down at the plate.

It was Chicago's second stellar defensive play of the inning. Earlier, center fielder Albert Almora Jr. made a sliding, over-the-shoulder catch on the warning track to rob Joey Votto of an extra-base hit.

"That's probably the best play I've ever had made when I was pitching, by far," Mills said.

Garcia's two-run shot in the second got the Cubs close and Bryant tied it with a solo homer in the sixth to chase DeSclafani, who had retired the previous seven batters.

The Cubs wore throwback uniforms to honor the 1969 team, which spent much of the season in first place before being overtaken by the Miracle Mets in September. Seven members of the team - including Ferguson Jenkins, Billy Williams and Randy Hundley - attended the game.

Back in 1969, Schwarber's homer would have bounced off the wall and still been in play. The baskets weren't installed at Wrigley Field until 1970.

Florida reptile wrangler Frank Robb, who captured the alligator in the lagoon of Chicago's Humboldt Park early Tuesday morning, tossed a ceremonial first pitch and received a loud ovation. The 5½-foot alligator, nicknamed Chance the Snapper, did not attend.

Reds: C Curt Casali (right knee soreness) didn't start after being removed from Monday's game. Bell said Casali is fine and was available in an emergency. ... LHP Alex Wood (lower back spasms) threw a bullpen Monday and is scheduled to make a rehab start Wednesday night for Triple-A Louisville.

Cubs: C Willson Contreras (right foot strain) said he will rest Wednesday and Thursday before resuming baseball activities on Friday. He is hoping to be activated from the 10-day IL when he is eligible July 24 at San Francisco.

Cubs right-hander Yu Darvish (2-4, 4.72 ERA) faces Reds RHP Sonny Gray (5-5, 3.42) in the finale of the three-game series Wednesday afternoon. Darvish, who has 13 no-decisions in 19 starts this season, is still looking for his first win at Wrigley Field since signing with Chicago last year. Gray will be making his first career appearance at the iconic ballpark.