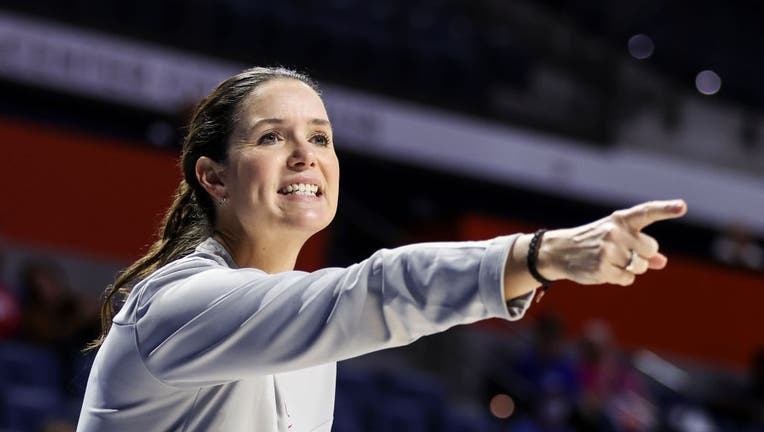 Head coach Shauna Green of the Dayton Flyers gestures during the first half of a game against the Florida Gators at the Stephen C. O'Connell Center on December 08, 2021 in Gainesville, Florida. (Photo by James Gilbert/Getty Images)

CHAMPAIGN, Ill. - Illinois hired Shauna Green is its women’s basketball coach on Monday, hoping she can lift a struggling program following a winning tenure at Dayton.

Green was chosen Atlantic 10 Coach of the Year three times while leading Dayton to five conference regular-season championships and a 127-50 record over six years. The Flyers went 26-6 this season, finishing first in the league in the regular season and beating DePaul in the NCAA Tournament before losing to Georgia.

"I truly believe the time is now for the program and we will work tirelessly to build it into a championship program," Green said in a statement.

Green is 156-75 in eight seasons as a head coach, including two at Loras College in Dubuque, Iowa. She has also been an assistant at Dayton, Northwestern and Providence.

She replaces the retired Nancy Fahey, a Women’s Basketball Hall of Fame coach who struggled over five years at Illinois after winning five national championships at the Division III level. The Illini went 7-20 this season and were 42-99 overall — 7-77 in Big Ten regular-season games — during her tenure.

"In visiting with Shauna, I was struck by her inner drive, her innate competitiveness, and her commitment to the student-athletes under her charge," athletic director Josh Whitman said in a statement. "She and I connected quickly around an ambitious vision for the future of Illinois women’s basketball, which she and her staff plan to spread around the state and across the country."