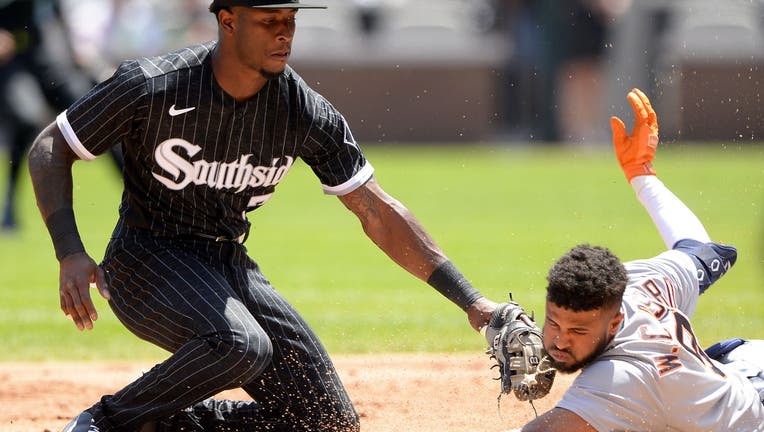 Tim Anderson of the Chicago White Sox tags Willi Castro of the Detroit Tigers in the face but did not have the ball in his glove on June 5, 2021 at Guaranteed Rate Field in Chicago, Illinois. The White Sox debuted their Nike City Connect Southside un (Ron Vesely/Getty Images)

CHICAGO - Tarik Skubal struck out a career-high 11 to win consecutive starts for the first time in his major league career, Eric Haase homered twice and the Detroit Tigers beat the White Sox 4-3 on Saturday.

Chicago manager Tony La Russa remained tied with John McGraw on the career manager wins list at 2,763, behind only Connie Mack at 3,731.

Miguel Cabrera also homered for the Tigers, who had lost 13 of their previous 14 games against the White Sox.

"We feel like we’re in every single game," Haase said.

José Cisnero pitched a perfect ninth for his first career save, helping Detroit improve to 11-19 in road games.

Nick Madrigal and Yoán Moncada had two hits apiece for the White Sox, who for the first time wore new black uniforms with "Southside" in a white Gothic typeface across the front of the jerseys and white pinstripes. 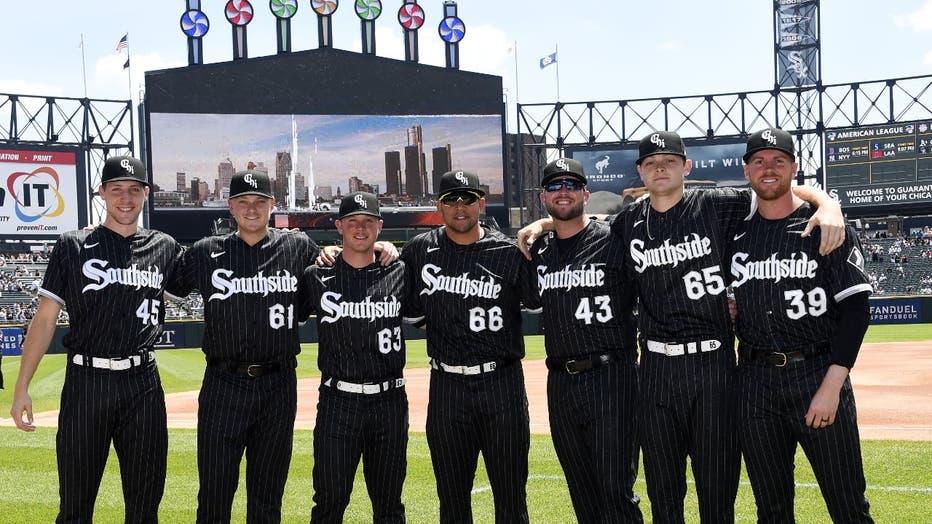 Skubal (3-7), coming off six shutout inning of three-hit ball against the New York Yankees on May 30, allowed one run and four hits in five innings. He has struck out at least eight in each of his last four outings.

"There’s a lot of pluses that come in an outing like that even though it didn’t go maybe an inning or two as long as we wanted it to," Tigers manager A.J. Hinch said.

Lucas Giolito (5-5) gave up four runs and seven hits in seven innings, including all three homers, and struck out nine. Giolito had won his previous three starts and went 4-2 with a 2.41 ERA in May.

Haase hit a two-run homer in the second inning and a solo shot in the fourth, giving him five homers in his last four games and his third career multi-homer game.

"The last week I feel like my approach has been a lot better and I’ve been able to put a lot better swings on baseballs," Haase said.

Derek Holland replaced Skubal and gave up three straight hits — including Jake Lamb’s two-run double — before recording an out.

Tim Anderson led off with a double and scored on Madrigal’s single to give Chicago the lead in the first.

Haase’s two-run shot put Detroit ahead 2-1 in the second. Haase added a solo shot in the fourth.

Cabrera hit a solo homer in the sixth.

"Overall, he got us into the seventh inning," La Russa said about Giolito. "I thought he competed really well, made a lot of good pitches. The one guy hit two home runs."

White Sox: Rookie OF Andrew Vaughn was reinstated from the COVID-19 injured list. He went on the IL Thursday. Vaughn, who has been vaccinated, said he had COVID-19 in December. Five tests he took earlier this week yielded negative results. ... INF/OF Gavin Sheets was optioned to Triple-A Charlotte. ... OF Billy Hamilton (right side soreness) exited after the fourth inning after an athletic trainer checked on him during his prior at-bat. La Russa said it looked like Hamilton "tweaked" his oblique area.

Ureña (2-4, 4.14 ERA) is expected to be activated from the IL to start Sunday’s series finale for Detroit. RHP Dylan Cease (3-2, 3.79) will start for Chicago. LHP Carlos Rodón (5-2, 1.98) was originally scheduled for the White Sox but will instead start Tuesday against Toronto for extra rest.