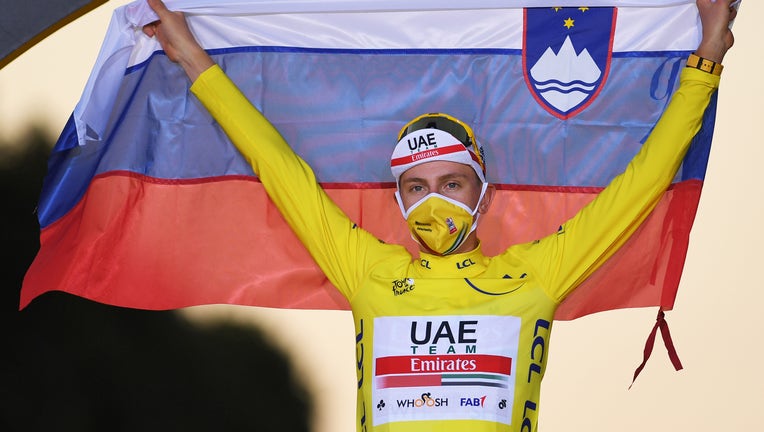 PARIS - In a first, the Tour de France winner wore a face mask on the podium Sunday, bright yellow to match the color of the iconic jersey so snug on his young shoulders.

But at least there was a winner.

Three weeks ago, when 21-year-old Tadej Pogacar set off with 175 other competitors that he ended up beating, not even race organizers were sure they would make it through the storm of France's worsening coronavirus epidemic and reach Paris.

"Really, I was scared we wouldn't get to the end," race director Christian Prudhomme conceded at the finish.

And so it was that Pogacar, up there on that podium, backlit by the pink hues of a Paris dusk, not only became the Tour's youngest champion in 116 years but also a symbol of resilience, of can-do, of learning to live with -- but not surrendering to -- the virus still causing so much pain.

Sure, it all felt weird, as so many things do these days. Example: Pogacar's mask puffed in and out, like an octopus glued to his face, as he sang the anthem of his native Slovenia, played in his honor.

But so liberating and invigorating, too, in this most horrid of years.

The rumble of the riders' wheels hammering over the cobblestones of Paris' Champs-Elysees. Alive, like heartbeats, on the famous boulevard that during lockdown just months ago was deserted.

The applause from the roadside crowds that, when they were all confined indoors, cheered only for doctors and nurses, coming out on their balconies each night to yell "Bravo!"

In towns and villages across France, that word has been heard again, over and over, these past weeks -- this time for the Tour's riders as they zoomed past in a kaleidoscope of colored jerseys, the yellow one most prized of all.

And against the virus that doesn't care how old or young its victims are, how hopeful it seemed that the Tour's winner should come from the same generation asking itself: What is life going to be like for us?

"It's super. I adore that," said Lea Tilhac, a 23-year-old student who got to the Champs-Elysees hours early to be sure of being among the 5,000 people allowed to line its length, the socially-distanced limit this year. "It shows there's a future."

For Pogacar, the future now looks brighter than ever. The victory on the eve of his 22nd birthday and the way he went about it during 3,482 kilometers (2,164 miles) of racing -- with an intoxicating mix of youthful insouciance and steely grit -- transformed him from prodigy into cycling superstar, a Tour rookie so talented he KO'd the race on his first attempt.

He is Slovenia's first winner and the Tour's second-youngest behind Henri Cornet, who was just shy of 20 when he was crowned in 1904.

Pogacar sealed the win in a high-drama time trial on Saturday, the last real day of racing for the title. In an astounding reversal, he dethroned race leader Primoz Roglic, his countryman who had held the yellow jersey for 11 days. Pogacar held it for just one day, the last and most important, on the processional ride to the finishing line in Paris, with yellow bike to match.

On the podium, Pogacar's mask hid his smiles, but the creases around his eyes gave them away.

"This is just the top of the top," he said. "It's been an amazing three-week adventure."

With jets trailing plumes of red, white and blue smoke above Paris as the riders raced, organizers could finally breathe free. None of the 176 starters, or 146 finishers, tested positive for the virus in multiple batteries of tests, validating the hermetic bubble of measures that shielded them from infection and the decision to postpone the race from July to September, but not to cancel it.

The only COVID-19 positives touched a handful of team employees and Prudhomme, the director, even as infection numbers soared across the country.

Prudhomme was back after a week of self-isolation. Wearing a mask, he signaled the start of Sunday's stage at Mantes-La-Jolie west of Paris with a wave of his flag through the sunroof of his car.

One of the pandemic-defying Tour's most enthusiastic backers was also its most powerful: French President Emmanuel Macron. With his government trying to revive France's COVID-battered economy, Macron praised the race as "the pride of the country" and an example of how it must learn to live with the virus and the restrictions it imposes.

"Even in September, the Tour de France is magic!" Macron tweeted Saturday after Pogacar's demolition of Roglic in the time trial.

Largely deprived of racing as the epidemic tore across the globe, and with those in lockdown only able to keep fit on home trainers, riders arrived at the Tour somewhat race-rusty but with pent-up energy, their disrupted seasons reconfigured to make them peak physically on cycling's biggest stage.

After a slow-burn start, with multiple crashes, the racing became increasingly furious. Roglic, the winner of last year's Spanish Vuelta and a pre-Tour favorite, was backed by a powerful Jumbo-Visma team of star riders devoted to putting him in yellow -- achieved on Stage 9 -- and then keeping the jersey until Paris.

And, as for the virus, well, it only got a bit-part, as a gatecrasher. Unwanted and troublesome, yes, but not able to force the party's cancellation.