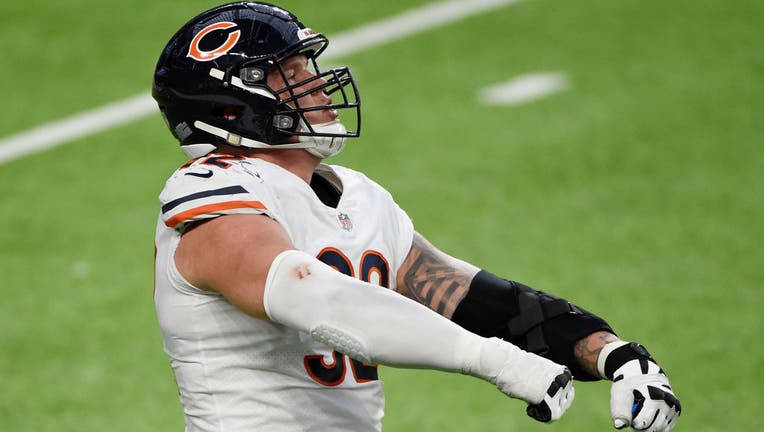 MINNEAPOLIS, MINNESOTA - DECEMBER 20: Brent Urban #92 of the Chicago Bears celebrates during the fourth quarter against the Minnesota Vikings at U.S. Bank Stadium on December 20, 2020 in Minneapolis, Minnesota. (Photo by Stephen Maturen/Getty Images)

LAKE FOREST, Ill. - From the doldrums of three weeks ago to now, the Chicago Bears’ offense led by quarterback Mitchell Trubisky has made a major turnaround.

After reaching at least 30 points in three straight games for the first time since 2013, the offense has revived playoff hopes for the Bears (7-7) heading into Sunday’s road game against the Jacksonville Jaguars (1-13).

"Guys are excited to be on the field," Trubisky said. "We’re excited to have the football, and there’s just a strong, quiet confidence about us that all 11 guys in the huddle are going to get the job done."

The Bears felt so confident on offense Sunday they chose to take the ball to start their 33-27 win over the Minnesota Vikings rather than rely on their dependable defense first and kick off.

It’s something they probably wouldn’t have considered at midseason.

"I think we keep getting better each week as an offense, which is important," Trubisky said. "We’re gaining confidence as a unit, and right now. We’re executing at a high rate, which obviously helps consistency across the board. And we’ve been efficient."

Behind Trubisky and running back David Montgomery, the Bears have risen from last in the league in rushing to 24th, and from 31st in total offense to 27th. As a result, they’ve stayed within a game of the Arizona Cardinals in pursuit of the final wild-card berth.

Gone are many of the penalties and turnovers of early season. They’ve been replaced by points. It didn’t hurt that they did it against several struggling defenses, though.

"Everybody is in the same line of thought," coach Matt Nagy said. "We’re all thinking the same. We’re all speaking the same language. If a bad play happens, there’s no negativity. It’s positive vibes. And that’s what has helped. And then it’s the mentality of these players, too. They’re in a really good place mentally.

"There’s a huge togetherness with them right now. And you know, that was a struggle for a lot of this year. We were searching."

They found what they needed with a revamped offensive line and Montgomery’s running. He went over 100 yards rushing in three of the last four games and the team did it four straight, a number the Bears failed to reach for seven straight games earlier.

Now they’re moving the pocket for Trubisky with bootleg passes to spread out the field on fakes off the running game.

"We’re doing well with the play-actions and movements right now, and the outside zone run," Trubisky said. "And then I would say just overall, our tempo in and out of the huddle has been helping us.

"So we’re finding an identity a little bit, we’re catching onto it."

The newfound confidence included Trubisky asking for and receiving certain plays within the offense. He’s so confident now, he’s even thinking more about the future.

The team declined his fifth-year contract option for 2021 during the past offseason and this could be his last bid to remain with the team.

"I would say I just wanted to control my own destiny," Trubisky said. "I’m controlling what I can control at this point. And I’m just trying to take control of my career and put it in the direction I want it to go.

"Sometimes you gotta be a little more assertive and speak up for what you want to happen, for what you believe in, and just go out there and continue to put the team first, like I have."

The defense carried the offense when the Bears lost six straight. As a result of that stretch, they still need help in the playoff chase, with at least one more Cardinals loss. Then they have to beat Jacksonville and Green Bay.