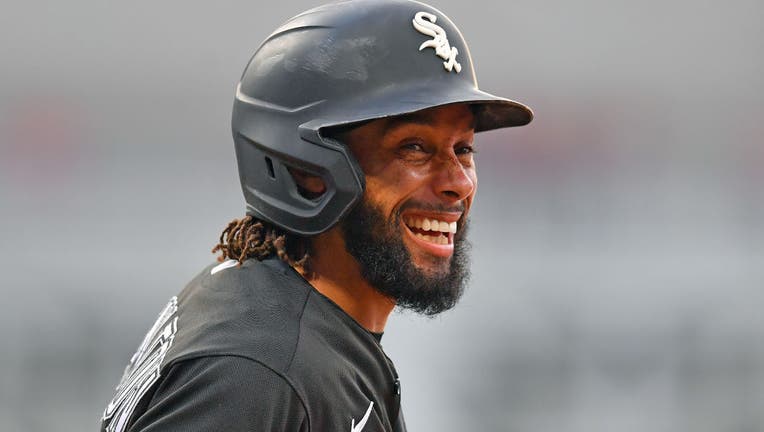 CLEVELAND, OHIO - MAY 31: Billy Hamilton #0 of the Chicago White Sox jokes with the first base coach during the fifth inning of game two of a doubleheader against the Cleveland Indians at Progressive Field on May 31, 2021 in Cleveland, Ohio. (Photo b

Hamilton is dealing with a right oblique strain. He left Saturday’s 4-3 loss to Detroit after the fourth inning.

"Pulled it a little bit, so he’ll be out of action for a while," manager Tony La Russa said.

The 30-year-old Hamilton is batting .217 with two homers and 10 RBIs in 36 games. He also has five steals in five attempts in his first season with the White Sox.

Engel strained his right hamstring during spring training, and then experienced some trouble during the rehab process. He played in seven games with Triple-A Charlotte on a rehab assignment, going 8 for 28 (.286) with a homer and three RBIs.

"As far as being on the field, I feel about as 100 percent as I can be," Engel said before Sunday’s 3-0 victory over Detroit. "I don’t think that my hamstring, from a strength standpoint, I’m not going to be maxing a leg curl in the next couple weeks, but I’m able to run full speed and do everything I need to do on a baseball field, so I’m excited to play."

Engel started in center in the series finale against the Tigers. He went 0 for 2 and swiped second after he was hit by a pitch in the sixth.

Engel made a nice running catch for the first out of the game. He robbed Niko Goodrum of a homer with a leaping catch at the wall in the fifth.

"Anytime you get to make a play for your pitcher, it’s a special play," Engel said.