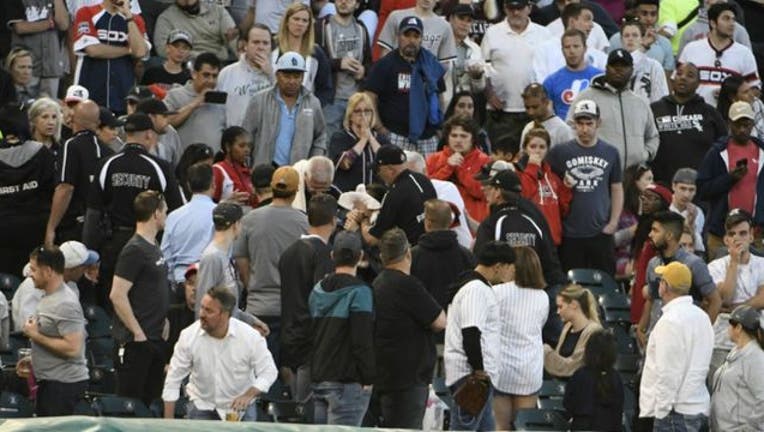 CHICAGO (AP) - The Chicago White Sox plan to extend the protective netting to the foul poles at Guaranteed Rate Field, becoming the first major league team to take that step since a couple of high-profile injuries this spring increased the focus on fan safety at ballparks.

The White Sox and Illinois Sports Facilities Authority, which owns the ballpark, are hoping to complete the project this season. They say they will announce more details at a later date.

Now that one team has jumped in front on the move, there likely will be more to come. It's hard to imagine a scenario where one major league team feels comfortable with less protection for fans than at another ballpark.

"Obviously that's a positive step in this sport," Chicago Cubs outfielder Albert Almora Jr. said before their game against the crosstown White Sox on Tuesday night. "I don't think anybody should go home with bumps or bruises or even worse. So whatever they got to do to take care of that, I'm glad they're taking procedures."

Following recommendations from Major League Baseball, by the start of the 2018 season all 30 teams had expanded their protective netting to at least the far ends of the dugouts after several fans were injured by foul balls in 2017.

But a liner by Almora struck a young girl in Houston in May, and a woman was hit by a foul ball off the bat of White Sox slugger Eloy Jiménez in Chicago on June 10. Each of the incidents occurred in the stands beyond the dugout on the third base side, sparking several players to call for expanded netting.

The Chicago Sun-Times was the first to report on the plans for Guaranteed Rate Field.

"It's a positive," Cubs ace Jon Lester said. "Obviously when one team does it, then you get kind of the herding effect and the rest of the people usually follow."

Almora was visibly shaken after the liner against the Astros.

"I am a father and I am a fan of this game," he said. "I just don't want to see things like that ever happen again."

Baseball Commissioner Rob Manfred said June 4 he doesn't expect teams to make changes to the protective netting during the season, but he thought conversations would continue about whether netting should be extended.

The netting was expanded before the 2018 season because of a couple of scary plays two years ago.

White Sox ace Lucas Giolito praised his team's decision to take the next step at its ballpark.

"For me, I think that in today's day and age you have a lot of young fans and guys are hitting the ball harder," he said. "I see the counter-arguments, like 'Well, don't sit there or just pay attention to the game.' Dude, like no matter how much you're paying attention to the game, if that thing is coming in 115 mph with tail, no matter if you have a glove this big, it could hit you right in the forehead.

"So for me being around baseball for so long, I think it's a smart move because it just keeps people safe. I hate seeing young kids get hit and having to go to the hospital. It just leaves a sick feeling in all our stomachs."