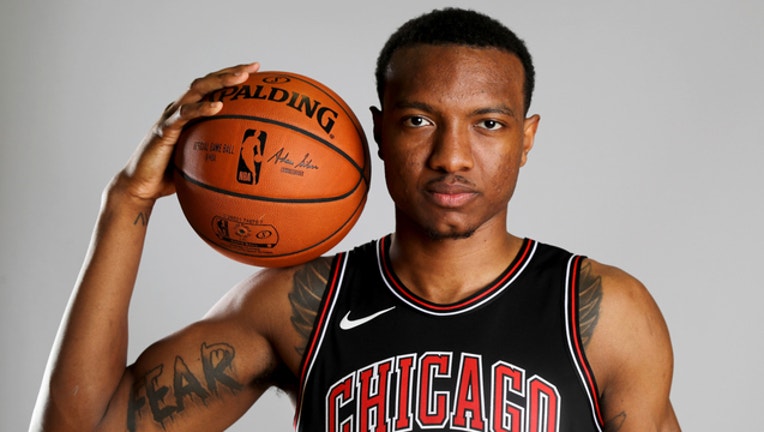 Wendell Carter Jr. of the Chicago Bulls poses for a portrait during the 2018 NBA Rookie Photo Shoot at MSG Training Center on August 12, 2018 | Photo by Elsa/Getty Images

CHICAGO (AP) - The Chicago Bulls missed the playoffs for the second time in three years last season and finished with their worst record in a decade-and-a-half.

Even so, management believes the team is setting itself up to climb the Eastern Conference standings.

"You're not going to hear (general manager) Gar (Forman) or I talk about wins or anything like that," executive vice president of basketball operations John Paxson said. "But the expectations are to see this team come together. ... We feel we're deep. We've got at least two deep at every position."

If Paxson's message sounds similar to the one he delivered after last season, well, not much has changed since then.

Though the Bulls hardly appear to be championship contenders, they believe they have the potential to make a jump after going 27-55, their worst finish since 2003-04. They are banking largely on improvement from within to start climbing in the Eastern Conference, starting with the season opener at Philadelphia on Oct. 18.

That means Lauri Markkanen building on an impressive rookie season and Zach LaVine showing he really is a franchise cornerstone. It wouldn't hurt, either, if Jabari Parker stayed healthy after signing with his hometown team in the offseason.

The Bulls expect Markkanen to miss the first few weeks because of a left elbow sprain. The 7-foot forward from Finland was injured at practice late last month, a blow for a rebuilding team. But the Bulls are expecting bigger things after he finished fourth among rookies at 15.2 points per game and second in rebounding (7.5) because of his work ethic and dedication in the weight room.

"On the defensive end is where it will help him most, being able to play more positions comfortably," coach Fred Hoiberg said.

The Bulls didn't wait long to match the $80 million, four-year offer sheet LaVine signed from Sacramento as a restricted free agent in July. Not a huge surprise. After all, the Bulls didn't get LaVine, along with Kris Dunn and the rights to Markkanen, in the 2017 draft night trade with Minnesota for Jimmy Butler only to let him go after one season. Now, it's time for the payoff from the two-time slam dunk champion. LaVine missed the first 42 games while recovering from a torn anterior cruciate ligament in his left knee and sat out the final 14 because of tendinitis in the same knee. He struggled to find his rhythm in between, averaging 16.7 points on about 38-percent shooting in 24 games. A major question is how he'll fit with Markkanen and Dunn.

Parker gets a chance to get his promising career back on track with his hometown team. The son of a former NBA player, Parker averaged 15.3 points and 5.5 rebounds in four seasons with Milwaukee. He also tore the ACL in his left knee twice. Parker might be a bit of an odd fit since he figures to play more at small forward than power forward once Markkanen returns. But it's a low-risk deal with the Bulls holding an option on that second year. Parker starred at Chicago's Simeon Career Academy -- the same school where former No. 1 draft pick and Bulls MVP Derrick Rose played -- before going on to Duke and the Bucks.

The Bulls drafted Wendell Carter Jr. with the No. 7 overall pick. And they are banking on big things from the big man. The 6-foot-10 Carter averaged 13.5 points and 9.1 rebounds as a freshman at Duke last season while helping the Blue Devils advance to the Elite Eight. With his ability to hit from the outside and score down low, the Bulls see him as a strong complement to Markkanen.

Hoiberg comes into his fourth season with a 110-136 record and a roster more suited to his pace-and-space style. That's something he didn't have early in his tenure. It's also something that's changed the past two offseasons. And a younger roster is a better fit for Hoiberg, who had no experience as an NBA head coach when he was hired away from Iowa State in 2015.

"The commitment that Fred and the players made this summer to improvement really are creating a culture with these young guys of playing hard, working together," Forman said.