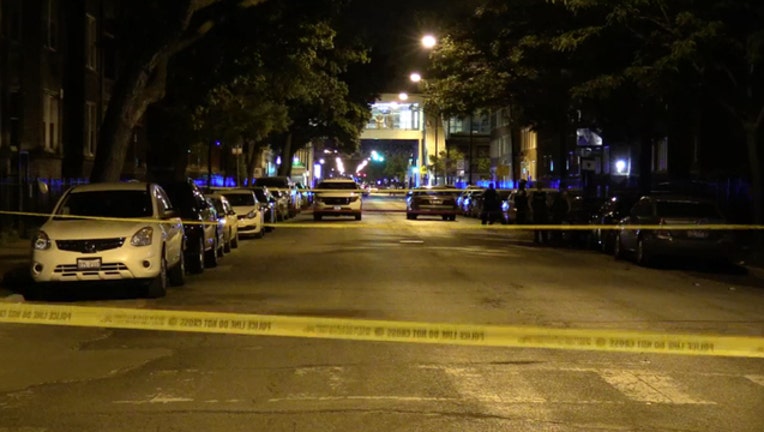 A man was shot in the back and abdomen late Thursday in Washington Park. | Network Video Productions

CHICAGO (SUN TIMES MEDIA WIRE) - A man was killed and at least 12 other people were wounded in shootings Thursday on the South and West sides, according to Chicago Police.

The homicide happened at 3:11 p.m. at Powell’s Barber Shop, a staple in the Englewood neighborhood.

Two men, ages 36 and 37, were inside the business in the 1100 block of West 63rd street when a gunman fired shots from outside, according to Chicago Police.

The older man was shot in the arm and was taken to Stroger Hospital, where he was pronounced dead, police said.

The Cook County medical examiner’s office identified him Friday morning as Gerald Sias, of the 7200 block of South Carpenter.

The younger man was shot in the leg and taken to the same hospital in critical condition, fire officials said.

The shop, tucked in the corner of a busy strip mall at West 63rd Street and Racine, has become a neighborhood hub since it opened six years ago.

The latest nonfatal shooting happened in the Roseland neighborhood on the Far South Side.

He was taken to Roseland Community Hospital, police said. His condition had stabilized.

A 23-year-old man was standing on the sidewalk in the 6200 block of South King Drive about 11 p.m. when a male walked up and shot him, according to police.

He suffered gunshot wounds to the back and abdomen and was taken to Stroger Hospital, where he was listed in critical condition, police said.

In West Englewood, a 50-year-old woman was shot in the abdomen while sitting on a porch at 9:05 p.m. in the 7000 block of South Throop, police said. She was taken to Advocate Christ Medical Center in Oak Lawn, where her condition was stabilized.

Twenty minutes earlier, a 26-year-old man was shot in the left arm while walking out of a store in the Humboldt Park neighborhood, police said. It happened at 8:40 p.m. in the 1100 block of North Pulaski, and he was taken to Mount Sinai Hospital in good condition.

Another 26-year-old man was wounded ten minutes before that in East Garfield Park, where he was shot in the back while driving in the 3600 block of West Lexington at 8:30 p.m., police said. He kept driving to Mount Sinai, where he was listed in critical condition.

About 7:30 p.m., a 17-year-old boy was standing on a sidewalk in the 9700 block of South University Avenue in the Cottage Grove Heights neighborhood when a gray car pulled up and someone inside shot him in the left shoulder. He was taken to Christ Medical Center, where his condition was stabilized, police said.

Another South Side drive-by shooting happened about 3 p.m. in Greater Grand Crossing, where someone in a beige SUV opened fire on a 21-year-old man near 76th Street and South Chicago Avenue. He ran to the 7500 block of South Dorchester, where he realized he’d been shot twice and called for help, police said. He was taken in good condition to Northwestern Memorial Hospital with gunshot wounds to the left leg and arm.

Early Thursday, a 25-year-old man was shot in Fuller Park. He showed up at Advocate Trinity Hospital at 2:53 a.m. with a shoulder wound and told investigators he’d been shot near 45th Street and Shields, police said. He was listed in good condition.

About 2:45 a.m., two men were shot in the Fernwood neighborhood. The 20- and 25-year-old were standing outside near 102rd Street and State when they heard shots and realized they each were hit in the leg, police said. They were taken to Christ Medical Center in fair condition.

The day’s first shooting happened about 12:40 a.m. in South Shore, where a 35-year-old man was shot in the thigh and shoulder while sitting in a parked car in the 7100 block of South Clyde, police said. He drove to Jackson Park Hospital, where his condition was stabilized.

Additionally, a man was found shot to death after a domestic disturbance about 12:30 a.m. in West Englewood, though authorities said it was unclear if his head wound was self-inflicted. An autopsy was scheduled for Friday.