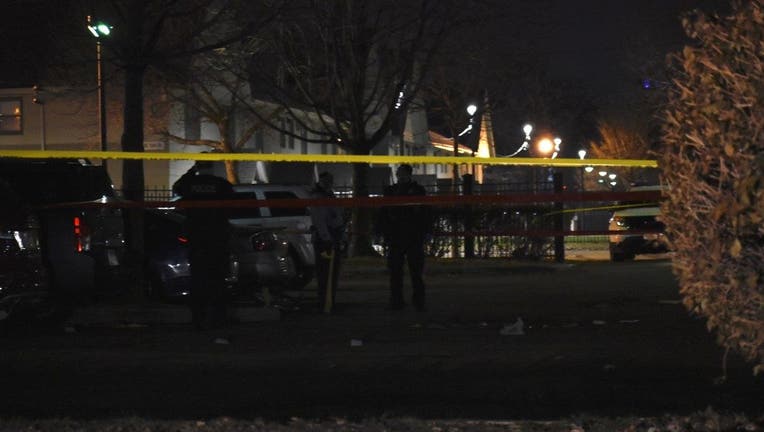 Police investigate the scene where a man was fatally shot Nov. 22 in the 1200 block of South Throop Street in University Village. | Carly Behm/Sun-Times

CHICAGO - A man was killed and 19 other people were wounded by gun violence across Chicago this weekend.

Rayveon Hutchins was walking at 11:59 p.m. in the 1200 block of South Throop Street when a male approached him and opened fire, Chicago police and the Cook County medical examiner’s office said. Hutchins, who lived in University Village, was struck in the head, hip and back and was taken to Stroger Hospital, where he was pronounced dead Saturday morning.

The most recent non-fatal shooting wounded an 18-year-old man Sunday in Austin on the West Side.

He was in a vehicle in an alley about 8:28 p.m. in the 4800 block of West Fulton Street when he heard gunfire and felt pain, Chicago police said. His condition was stabilized at West Suburban Medical Center.

Earlier in the day, two 14-year-old boys were shot inside a home in Englewood on the South Side.

About 4:05 p.m., they were in the hallway of an apartment complex in the 6100 block of South Carpenter Street, when they heard gunshots and felt pain, police said.

One 14-year-old was struck in the hand and the other was grazed by a bullet on his buttocks, police said. They both were taken to Comers Children’s Hospital in good condition.

Saturday, a man was wounded when he was shot in Kenwood on the South Side.

The 23-year-old was walking about 11 p.m. in the 900 block of East 47th Street when he heard gunshots and felt pain, according to police. He was taken to the University of Chicago Medical Center with a gunshot wound to the leg. The man told investigators he did not see the shooter or know where the shots came from.

In the morning, a woman was seriously wounded and a man was grazed by a bullet in Gresham on the South Side.

The 21-year-old woman was driving with an acquaintance at 2:17 a.m. when a white Nissan started following them in the 8500 block of South Justine Street, according to police. She tried to get away and crashed her vehicle into an unoccupied parked car. As the woman and her passenger, a 25-year-old man, exited the vehicle and tried to run away, at least one person got out of the Nissan and started shooting at them.

The woman was shot in the face and arm and taken in serious condition to Christ Medical Center in Oak Lawn, according to police. The man suffered a graze wound to his arm and refused medical treatment.

A double shooting less than an hour earlier wounded two men in Park Manor on the South Side.

They were standing on the sidewalk about 1:52 a.m. in the 6900 block of South Indiana Avenue when a male approached them and fired shots, police said. A 30-year-old man was struck in the lower back and he took himself to the University of Chicago Medical Center, where his condition was stabilized. A 22-year-old man was shot in the head and he was taken to Stroger Hospital in serious condition.

The weekend’s earliest shooting left two people injured while driving in Avondale on the Northwest Side.

They were in a vehicle about 10:50 p.m. in the 3400 block of North Kedzie Avenue when someone shot at them from a passing white sedan, according to police. A 35-year-old man was shot in the head, arm and shoulder. The other man, 30, was shot in the back. They drove themselves to Illinois Masonic Medical Center, where their conditions were stabilized.

Eight other people have been injured in shootings across the city since 5 p.m. Friday.

Last weekend, gun violence across Chicago killed one person and wounded 26 others.