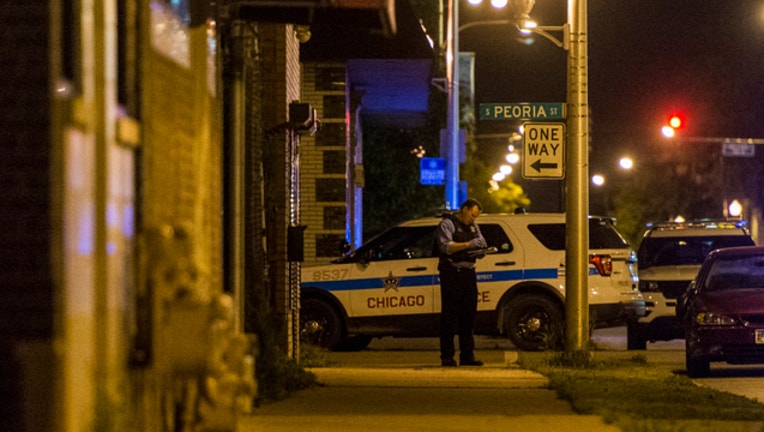 Chicago police investigate a 11-year-old who was found dead inside a home Monday morning in the 900 block of West 119th Street. | Tyler LaRiviere/Sun-Times

CHICAGO (SUN TIMES MEDIA WIRE) - Eleven people were wounded by gunfire Monday across the city and an 11-year-old boy was found shot to death in the West Pullman neighborhood on the Far South Side.

About 1 a.m., emergency crews found Jechon Anderson unresponsive with blunt force trauma to the head about on the floor of a home in the the 900 block of West 119th Street, according to Chicago Police and the Cook County Medical Examiner’s Office. He was pronounced dead at the scene.

Investigators later determined the boy was shot, according to a spokesman for police. Results of an autopsy expected to be performed Monday have not been released.

Anderson lived on the same block where he was found.

Police were conducting a homicide investigation and three people were being questioned about the death later Monday, police said.

About 6:04 p.m., a teenage girl was wounded in a drive-by shooting in the South Side Bronzeville neighborhood.

The 15-year-old girl was walking with two friends in the 3600 block of South Indiana when she heard gunfire and saw a black vehicle drive off, according to police.

She suffered a gunshot wound to the right forearm and was taken to Mercy Hospital in good condition, police said. Area Central detectives were investigating the shooting.

Fifteen minutes later another teen was shot in the South Chicago neighborhood.

At 6:19 p.m., a 63-year-old man with a concealed carry license shot a 16-year-old boy during an attempted armed robbery in the South Chicago neighborhood.

The man was walking with another person in the 8000 block of South Oglesby when the boy and his three accomplices pulled out weapons and demanded their property, according to police. The man then pulled out his own gun and shot the boy in his knee, at which point the other suspects ran off.

The boy’s weapon turned out to be a replica handgun, police said.

He was taken to University of Chicago Medical Center in serious condition, police said.

Ten adults were also shot over the course of the day.

About 3:40 a.m., a 29-year-old man was outside in the 5600 block of South Princeton Avenue in the Englewood neighborhood on the South Side when someone in a black SUV drove by and fired shots, police said.

He was struck in the back and was taken to University of Chicago Medical Center in good condition, police said.

Two hours later,  two men were wounded in a shooting in the Woodlawn neighborhood on the Southwest Side.

The men, ages 19 and 22, were walking on a sidewalk at 5:34 a.m. in the 900 block of East 65th Street when they heard gunfire and realized they’d been shot. The younger man suffered a gunshot wound to the right foot, while the older man was shot in his back, according to police.

They were both taken to University of Chicago Medical Center, where their conditions stabilized, police said.

The next shooting happened about 12 hours later, when a man was shot in the neck and critically wounded in the Rosemoor neighborhood on the Far South Side.

At 5:08 p.m., the 22-year-old was driving east on 95th Street when he stopped at a red light at Cottage Grove and the driver of a light-colored SUV fired shots and continued eastbound, according to police.

He was taken to University of Chicago Medical Center in critical condition, police said.

At 7:08 p.m., a 49-year-old man shot and seriously wounded a 20-year-old man who refused to leave his property in the East Garfield Park neighborhood on the West Side.

The younger man was taken to Stroger Hospital in serious condition. The homeowner was being questioned by investigators, police said.

Four more people were shot Monday night, including a 39-year-old man who was wounded in a drive-by shooting in the South Side Englewood neighborhood and a 25-year-old man shot in the East Garfield Park neighborhood on the West Side.

Two people were also wounded while leaving a restaurant in the South Side Chatham neighborhood.

An 18-year-old woman and a 54-year-old man were shot when a light-colored sedan pulled up and someone inside fired shots in the 7800 block of South King Drive .

The woman suffered a gunshot wound to her right knee, while the man was shot in his left arm, police said. They were both taken to University of Chicago Medical Center, where their conditions stabilized, police said.