As his family packed to move to a safer place in the suburbs, a 14-year-old boy was shot and killed in Lawndale on the West Side Thursday afternoon.

CHICAGO - As his family packed to move to a safer place in the suburbs, a 14-year-old boy was shot and killed in Lawndale on the West Side Thursday afternoon.

Tyrese Taylor was shot several times around 1:45 p.m. on a sidewalk in the 1100 block of South Karlov Avenue, not far from a U-Haul van the family had been loading, authorities and family said.

Officers were flagged down by a witness who directed them to a rear porch, where officers found Tyrese facedown on the porch stairs, police said. He had gunshot wounds to his head, body and legs.

Paramedics took the child to Mount Sinai Hospital, where he was pronounced dead, according to the Cook County medical examiner’s office.

Police taped off the U-Haul moving truck, next to Frazier International Magnet Elementary School, as they worked the scene late into the afternoon. Detectives were reviewing police and CPS surveillance video. 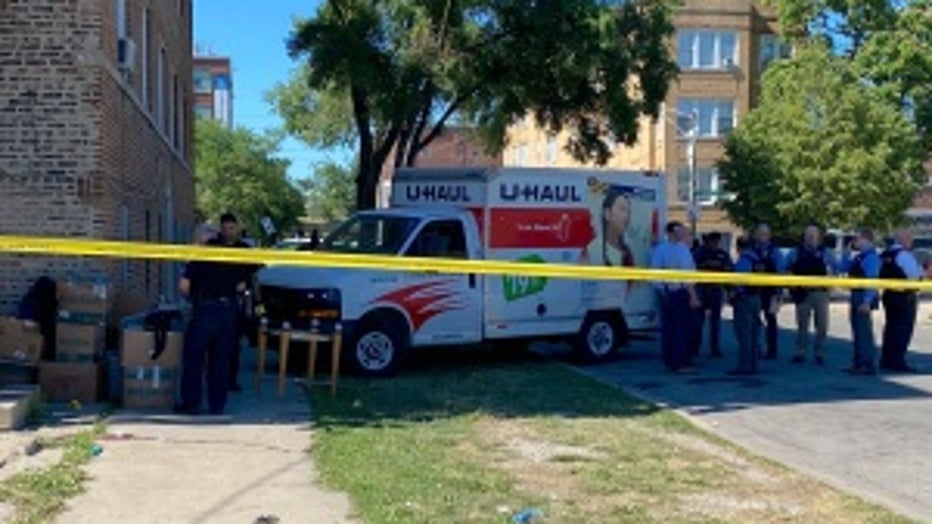 Police investigate where a boy was shot June 10 near Roosevelt and Karlov. | Manny Camarillo/ Sun-Times

It’s unclear how many shooters there were. At least 10 gunshots were detected by police’s ShotSpotter system. Police recovered four .40-cal shell casings and two 9mm casings.

No one was in custody.

The boy’s mother was moving the family to the suburbs to let him live in a calmer environment, according to a neighbor who said he knew the teen well.

The man said he saw a white car drive up and someone fire shots at the boy.

The boy’s aunt, Dorothy Taylor, said the boy "loved to game" on his XBox. She said he was smart and went to Webster Elementary, a block north of where the shooting happened.

The boy had three sisters and five brothers, she said. "He was the baby."

Ten other children aged 15 or younger have been shot dead so far this year, according to Sun-Times records. That’s more than the number killed in all of 2019.

The most recent fatal shooting of a child happened June 2 in Back of the Yards on the South Side. Savanah Quintero, 14, was shot in the head after three young gang members asked which gang she was affiliated with. After she said she wasn’t, the attackers chased her and opened fire.