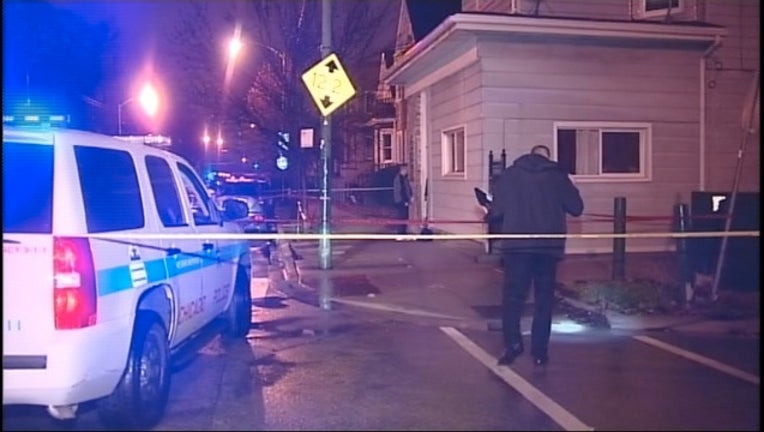 CHICAGO (Sun-Times Media Wire) - Four people were killed and at least 11 others wounded in shootings across Chicago on Thursday.

The 28-year-old man killed in the latest fatal shooting tried to rob two others in an Uptown alley about 10:30 p.m., according to Chicago Police.

He walked up to the two 23-year-old men who were unloading a vehicle in the 1000 block of West Winona and demanded their things, police said. One of the younger men handed over his cellphone and wallet, but when the robber said he was taking the car, the other 23-year-old pulled out a gun and shot him multiple times, police said.

The man died at Mount Sinai Hospital of a gunshot wound to the chest and the woman at Stroger Hospital of a back wound, police said. Their names have not been released.

The teen was shot in the leg. His condition was stabilized at Mount Sinai, police said.

Guzman was outside near his home in the 2900 block of North Sacramento about 1:45 a.m. when a white SUV pulled up and someone inside started shooting, hitting him in the chest, authorities said. He died at Advocate Illinois Masonic Medical Center at 2:33 a.m.

Another six people were injured in three separate shootings following the double-homicide on Wilcox.

About 4:50 p.m., a 31-year-old man was shot in the West Englewood neighborhood. He was standing outside in the 5500 block of South Hoyne when someone walked up and shot him in the face and groin, police said. He was taken in critical condition to Mount Sinai Hospital.

At 4:11 p.m., a 25-year-old man was shot in the back in Ashburn neighborhood’s 7900 block of South Kenneth. His condition was stabilized at Advocate Christ Medical Center in Oak Lawn, police said.

At 4:09 p.m., four men outside in the 6800 block of South Throop in Englewood were shot by someone in a passing vehicle. A 43-year-old man was taken to Christ in serious condition with a wound to the abdomen. Two 30-year-old men shot in the foot were listed in good condition at St. Bernard Hospital, and another man took himself to Holy Cross Hospital in fair condition with hand and leg wounds, police said.

Thursday morning in East Garfield Park, someone got into an argument with a 19-year-old man in the 3200 block of West Maddison about 10 a.m. and then shot him twice in the leg, police said. A relative took him to Norwegian American Hospital.

About 6:15 a.m., a 26-year-old man was shot in the chest and arm in Little Village’s 2400 block of South St. Louis, police said. He was taken in serious condition to Mount Sinai.

Another Little Village shooting left a 32-year-old man hurt about 12:30 a.m. while he was driving in the 3100 block of West Cermak. He was at a stoplight when someone in a green van opened fire, hitting him in the ankle, police said. He took himself to Saint Anthony Hospital in good condition.

Thursday’s first shooting happened about midnight in Humboldt Park neighborhood. A 30-year-old man was on the sidewalk in the 2600 block of West Le Moyne when someone in a black vehicle shot him in the right leg, police said. He was taken to Stroger Hospital in good condition.