One of the day’s two fatal shootings claimed the life of a 29-year-old man in Dunning on the Northwest Side.

He was northbound in a vehicle at 3:53 a.m. in the 4000 block of North Narragansett Avenue when a male fired shots from a dark-colored SUV, Chicago police said.

The man was taken to Illinois Masonic Medical Center with a gunshot wound to his armpit, police said. He was pronounced dead at 4:38 a.m.

Earlier in the morning, a 23-year-old man was shot and killed in Garfield Park on the West Side.

Jordon Cooper was standing on the street about 1:03 a.m. in the 700 block of North St. Louis Avenue when he was shot, police and the Cook County medical examiner’s office said.

Cooper was struck in the head and pronounced dead on the scene, authorities said. He lived in Cortland, Illinois. 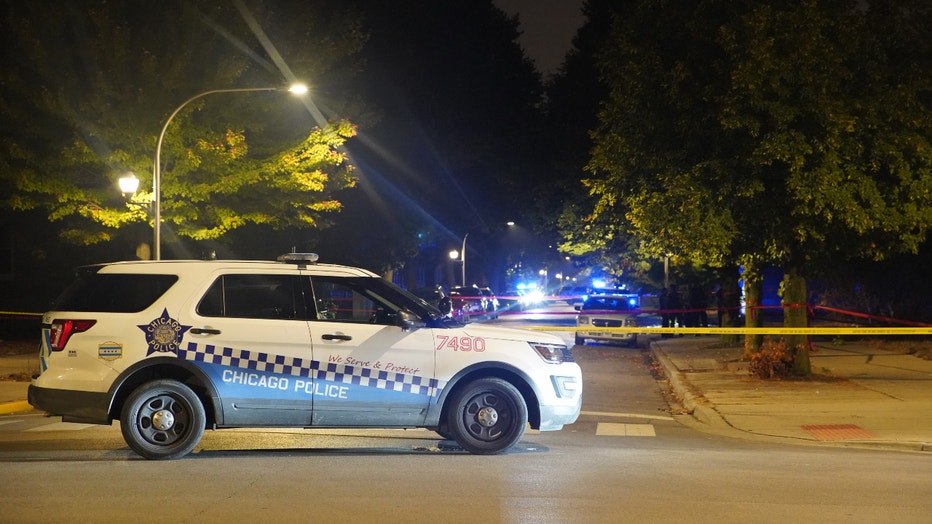 Police investigate the scene where a man was shot dead, in the 700 block of North St. Louis Avenue, Sept. 16, 2019, in Garfield Park. | Emmanuel Camarillo/Sun-Times

In the day’s latest shooting, a man was found critically wounded with multiple gunshot wounds in Grand Crossing on the South Side.

Officers responding to a ShotSpotter call about 10:35 p.m. found the 28-year-old on the ground next to a vehicle in a parking lot in the 1000 block of East 73rd Street, police said.

The man was taken to University of Chicago Medical Center with gunshot wounds to the chest and arm, police said. He was in critical condition.

Less than half an hour earlier, a 32-year-old man was shot in Englewood on the South Side.

The man was on a sidewalk about 10:10 p.m. in the 7000 block of South Sangamon Street when someone fired shots at him from an alley, police said. He was struck in the leg and the hip and taken to University of Chicago Medical Center where he was stabilized.

An 18-year-old man was shot Monday evening in South Chicago.

The man was walking about 8:35 p.m. in the 7900 block of South East End Avenue when someone fired shots at him, striking him in the foot, police said. He was taken to the University of Chicago Medical Center where his condition was stabilized.

Earlier in the afternoon, 17-year-old boy was shot in a robbery in South Deering.

About 5:45 p.m., the boy was standing on the street in the 10600 block of South Hoxie Avenue when someone approached him, flashed a gun and demanded his property, police said. The person took his property and fired shots at the boy, striking him once in the arm. He was taken to the University of Chicago Medical Center where his condition was stabilized.

In the day’s first reported shooting, a 25-year-old man was injured in Bridgeport on the South Side.

He was pumping gas about 1 a.m. in the 600 block of West 31st Street when a male approached him and opened fire, police said. The man was hit in the buttocks and groin, and his condition was stabilized at Stroger Hospital.

Monday’s shootings follow a weekend in which nine people were killed and 18 more wounded in shootings across the city.