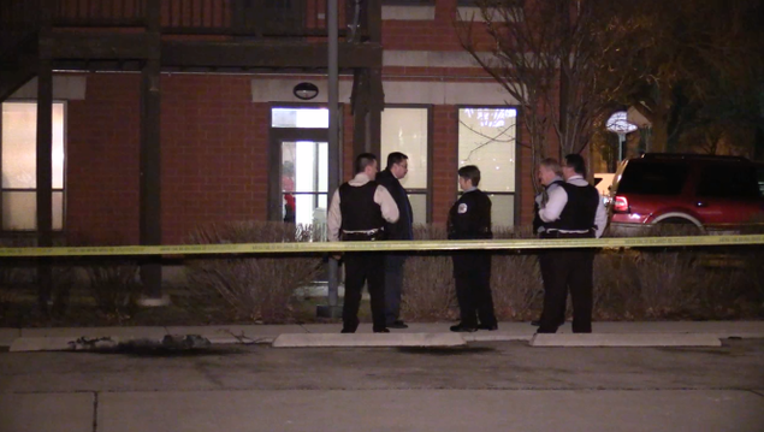 Police on the scene of a shooting Wednesday night in the Bronzeville neighborhood. | Network Video Productions

CHICAGO (STMW) - Two people were killed and six others were wounded in shootings across Chicago Wednesday.

Most recently, a man was shot to death in the Wicker Park neighborhood Wednesday evening.

The 19-year-old was shot in the head in the 1200 block of North Milwaukee at 6:05 p.m., according to Chicago Police. He was taken to Stroger Hospital, where he was pronounced dead.

Wednesday’s first fatal shooting happened just after midnight on the Near West Side.

Daysha Wright, 21, was a passenger in a vehicle in the 2100 block of West Maypole about 12:10 a.m. when someone fired shots and she was struck in the back, police and the medical examiner’s office said.

Wright, who lived in the 5100 block of South Paulina, was taken to Stroger Hospital, where she was pronounced dead at 1:44 a.m., according to the medical examiner’s office.

The most recent nonfatal shooting happened in the Bronzeville neighborhood on the South Side Wednesday night.

A 22-year-old man was standing on a rear porch in the 600 block of East 37th Street around 9:25 p.m. when he heard shots and felt pain, according police. He was shot in the left arm and taken to Northwestern Memorial Hospital in serious condition.

Earlier Wednesday evening, a 66-year-old man was shot in the Washington Heights neighborhood on the South Side.

The man was shot in the left shoulder and right leg at 7:06 p.m. in the 9200 block of South Ada, police said. He was taken to Advocate Christ Medical Center in Oak Lawn in good condition.

About nine hours earlier, a man was shot in the South Side Englewood neighborhood.

The 22-year-old was driving north in the 5800 block of South Aberdeen just before 10 a.m. when a silver car pulled up on the driver’s side and someone inside fired shots, according to police. The shooter’s car drove away west on 58th Street, and the victim’s car went out of control and crashed.

The man was shot in the stomach and was taken to Stroger Hospital in serious-to-critical condition, police said.

About five hours before that, a 34-year-old man was shot in the Gage Park neighborhood on the Southwest Side.

The man was driving north in the 5100 block of South Kedzie at 4:51 a.m. when a white vehicle going the opposite direction pulled up alongside him and someone inside fired shots, police said. He suffered a gunshot wound to the left foot and was taken to Mount Sinai Hospital in good condition.

A few minutes earlier, a man was shot while driving in the Irving Park neighborhood on the Northwest Side.

The 32-year-old was driving in the 3300 block of North Milwaukee at 4:45 a.m. when another vehicle pulled up alongside him and someone inside opened fire, police said. He was shot in the left arm and later showed up at Community First Medical Center, where he was listed in good condition.

Earlier Wednesday morning, a man waslked into a hospital and told investigators he was shot in the Little Village neighborhood on the Southwest Side.

About 2:15 a.m., the 32-year-old suffered walked into University of Illinois Hospital & Health Sciences System with a gunshot wound to the back, according to police. He said the shooting happened at South Western and South Blue Island avenues. He was listed in good condition.