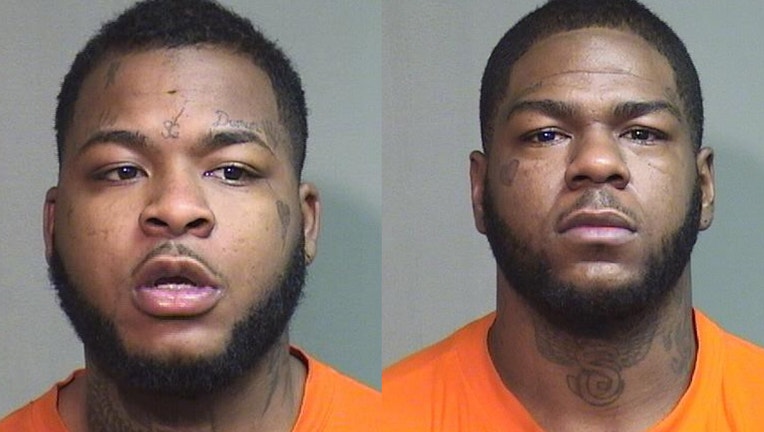 McHENRY COUNTY, Ill. - Two men were arrested in connection to a robbery that occurred in the parking lot of a pizza place in Wonder Lake Wednesday night.

Dashaun Harvest, 24, has been charged with one count of armed robbery and one count of mob action. His bond was set at $100,000.

Dawun Harvest, 24, has been charged with one count of obstructing and one count of mob action. His bond was set at $10,000.

At about 6:35 p.m., McHenry County Sheriff's deputies were dispatched to the parking lot of Napoli's Pizza located at 7613 Howe Road for an armed robbery.

According to police, two victims pulled into Napoli's Pizza and parked next to a gray Chevrolet car.

When they exited the car, one victim was approached by Dashaun Harvest, who demanded money from the victim at gunpoint.

The victim complied and then Deshaun got back into the vehicle and was driven away, the sheriff's office said.

The shots were later identified as pellets from a pellet gun, authorities said.

A traffic stop was conducted on the suspect's vehicle after the victims called 911.

During the stop, a passenger, Dawun Harvest, was found to be concealing a gun, which was later identified as a pellet gun.

The case is still pending investigation by the McHenry County Sheriff’s Office.