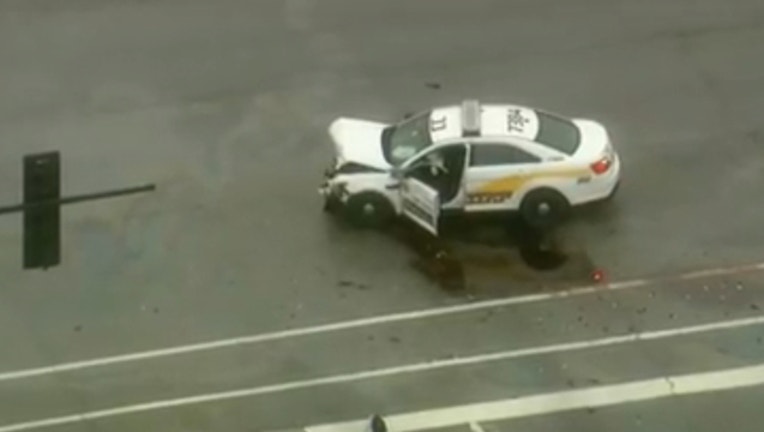 NILES (Sun-Times Media Wire) - Two women were killed when their Honda Accord was hit broadside by a Cook County sheriff’s office squad car Thursday morning at a busy intersection on the border of Niles and Morton Grove.

The squad car was eastbound on Dempster Street at 5:47 a.m. when it hit the passenger side of the Honda, which was southbound on Harlem Avenue, according to a statement from Niles police. The women had to be extricated by the Niles Fire Department and taken to Lutheran General Hospital in Park Ridge, where they were pronounced dead.

Niles Police Cmdr. Robert Tornabene said investigators have not yet determined who had the green light at the time of the crash, but the squad car was not on an emergency call and its lights and siren were not activated.

The driver of the Honda was identified as 69-year-old Ludwika Moskal, according to police and the Cook County medical examiner’s office. She lived in northwest suburban Norridge.

Her passenger was identified as 64-year-old Helena Lukasik, who lived in the Belmont Heights neighborhood on the Northwest Side, authorities said.

Autopsies of both women determined they died from multiple injuries in the crash and their deaths were ruled accidental, the medical examiner’s office said Friday.

The officer driving the squad car, a 47-year-old man, was also taken to Lutheran General with injuries that were not thought to be life threatening, according to police and sheriff’s office spokeswoman Cara Smith.

Police said weather may have been a contributing factor in the crash, but it remained under investigation Thursday by the North Regional Major Crimes Task Force Major Crash Assistance Team, which includes officers from 13 north suburban departments.

The intersection was reopened by about 11 a.m., according to police.