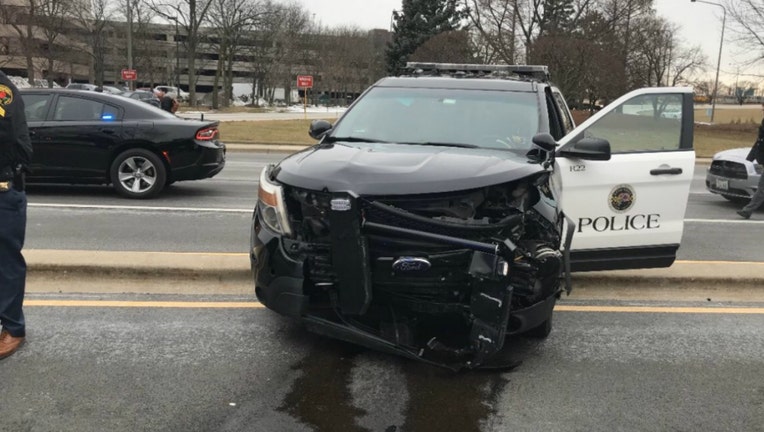 Three people were arrested after a crash with a police car that left a Rosemont police officer injured Feb. 12, 2020, on River Road between Bryn Mawr Avenue and Darcy Lane. | Rosemont police

ROSEMONT, Ill. - Three people were arrested after a car crashed into a police car while fleeing a traffic stop Wednesday in northwest suburban Rosemont, leaving one officer injured.

Officers pulled the car over after seeing it commit a traffic violation shortly after 12:30 p.m., according to a preliminary statement from Rosemont police.

During the stop, an officer smelled marijuana from inside the vehicle, police said. The driver refused to get out of the car and instead drove away.

While officers were chasing the car, someone tossed a loaded pistol out of it, police said. The car then hit a Rosemont police squad car that had its lights activated before crashing into a pole on River Road between Bryn Mawr Avenue and Darcy Lane.

An officer was taken to a hospital to be treated for injuries that are not thought to be life-threatening, police said.

Three people from the car were taken into custody after the crash and the gun was recovered, police said. All three suspects refused medical treatment.

River Road was closed while authorities investigated but was reopened shortly before 3 p.m., police said.