CHICAGO (SUN TIMES MEDIA WIRE) - Three people were dead and 18 others were wounded by the end of Sunday after a series of shootings throughout Chicago.

Two people were shot to death on the South Side during the 24 hour period. Daquan Albright, 17, was shot and killed in West Englewood, and 20-year-old Tyrone Marshall died after he was shot in his head as he was leaning on a car and talking with his friend in Bronzeville, Chicago police and the Cook County Medical Examiner’s Office said.

Earlier in the morning, 33-year-old Dennis Thomas Jr. was fatally shot in Uptown as he sat in a vehicle, authorities said. A bicyclist rode up to him, pulled out a weapon and opened fire.

Thomas was hit several times and was pronounced dead at the scene, authorities said. He lived on the same block where he was shot.

The last shooting of the day wounded five people in the Grand Crossing neighborhood on the South Side. About 10:55 p.m., the group was gathered outside in the 7400 block of South Dante Avenue after some had taken part in a weekly softball game, according to police.

Someone in a black van pulled up and opened fire into the crowd, police said. A man was in serious condition after he was shot in the chest. Three other men and a woman were treated for gunshot wounds.

About 9:40 p.m., a 32-year-old man was in critical condition after he was shot in his abdomen, shoulder and leg in the Jefferson Park neighborhood on the Northwest Side, police said. He was not cooperating with officers and would not provide any information about the shooting.

About 8:15 p.m., a man was shot in the head multiple times in the Scottsdale neighborhood on the Southwest Side. The 37-year-old was shot in the 8300 block of South Pulaski, according to police. He was taken in serious condition to Christ Medical Center in Oak Lawn.

A 19-year-old man was critically wounded in a shooting in the Bronzeville neighborhood on the South Side. The man was outside about 4:10 p.m. when someone in a dark-colored SUV pulled up and opened fire, according to police. He was shot in the chest and back.

About 2:30 a.m., a man was wounded in a shooting in Englewood. Officers responded to call for a person shot in the and found the 31-year-old lying in the middle of the street in critical condition, according to police.

An 18-year-old man was wounded in a drive-by shooting as he stood outside about 2:25 a.m. on the border of the Hermosa and Crain neighborhoods on the Northwest Side.

A teenage boy was shot and wounded as he stepped out of a vehicle about 2 a.m. in the Homan Square neighborhood on the West Side. The 17-year-old was approached by three people, police said. One of them pulled out a gun and opened fire.

About 1:25 a.m., a robbery turned into a shootout in West Garfield Park when the target of the robbery pulled out his own gun and fired back. He was shot in the leg and was seriously wounded. The would-be robber ran away.

About 1:10 a.m., a woman and man were wounded in a shooting in the Park Manor neighborhood on the South Side. They were standing outside when a white vehicle approached, someone stepped out holding a gun and opened fire, police said.

Two men in their 40s were shot and wounded in the Logan Square neighborhood on the Northwest Side. About 1 a.m., the men were sitting on a porch when three gunmen approached and opened fire, police said.

A man on a bicycle was shot and wounded about 12:20 a.m. in the West Side Austin neighborhood. He was struck in his hip and was taken to Stroger Hospital, where his condition stabilized, according to police.

The first shooting Sunday wounded a 29-year-old man as he sat on a porch about 12:15 a.m. in the Back of the Yards neighborhood on the South Side. 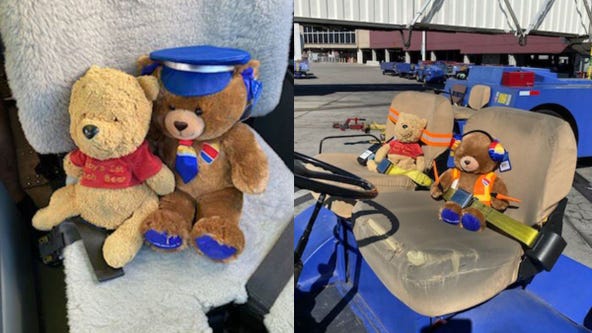